Have They Been Forgotten?


Here'a screenshot from the last Department of Labor unemployment insurance weekly claims report; the one that was released Thursday morning, January 23-- 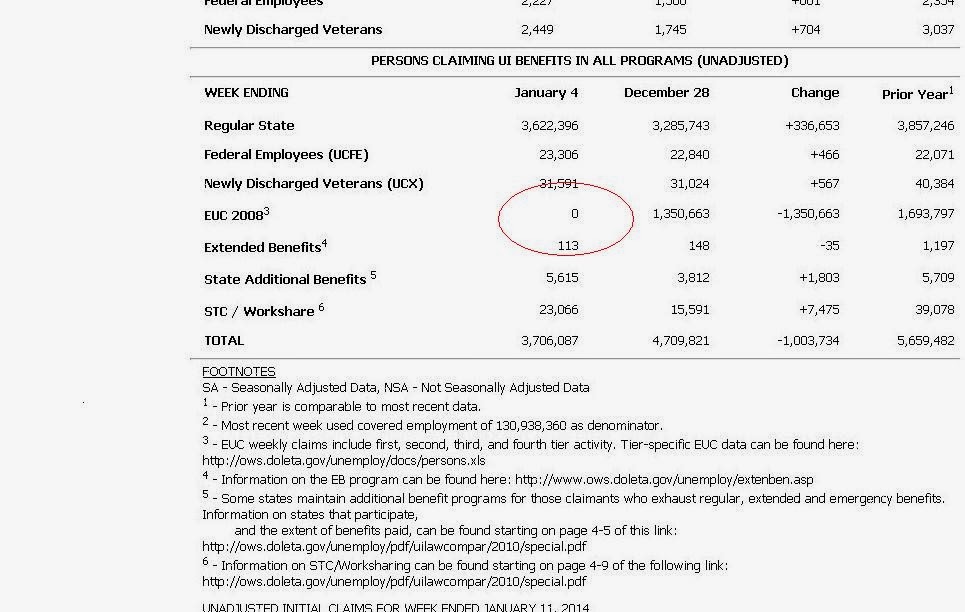 
Notice the ZERO that I highlighted.  About 1.4 million people claimed UI benefits in the federal Extended Benefits program (the "Tiers") in the week ending December 28th, the last week that people could apply for those extended benefits.  In the latest week for EUC claims to be reported.. the week ending January 4th?  Nope.  Nada.  A ZERO.  Not a very big ZERO, so I highlighted it in red.

Let's look at that number again:  1,350,663.  One million three hundred and fifty thousand and six hundred sixty-three people...  1,350,663 FAMILIES... that were receiving federal extended benefits in the week ending December 28th... and received NOTHING the next week.

And there are still 2.7 jobseekers for every job opening out there.

How are those 1,350,663 families surviving?  How many have another adequate income? How many have still more savings?  How many are on the verge of getting another job?  How many can qualify for disability or perhaps are old enough for Social Security?  How many have.. NOTHING?The sad thing is that we don't know the answers to those questions.  There is NO followup on how an individual... a FAMILY.. survives after they are no longer eligible for unemployment insurance.

And yet the governor of North Carolina says...

North Carolina cut their available weeks of unemployment insurance last summer.  They have only had 19 weeks of UI available since July.

The governor of North Carolina, a Republican named Pat McCrory, said in this New York Times article on the effect of cutting benefits in North Carolina:

“Employers were telling me they had vacant jobs, but people would say, ‘Hold that job until my unemployment benefits end.' ” said Gov. Pat McCrory, a Republican who is the prime mover behind the policy. “I heard that time and time again. Now, employers are telling us that people are coming in and filling out applications to accept jobs, not to meet the requirements of unemployment.”

Uh huh.  Sure, McCrory,  people were telling prospective employers to just "hold their jobs" until their $300/week of unemployment insurance ran out.  Sure they were.  And if you believe McCrory, you'll believe it's going to be 80 degrees in New York City tomorrow.