The May 2017 Jobs Report was released by the government's Bureau of Labor Statistics this morning, June 2. This is a fairly mediocre report, and it is unclear if it shows the beginning of a weakness in the job market, or whether it just shows an anomaly. 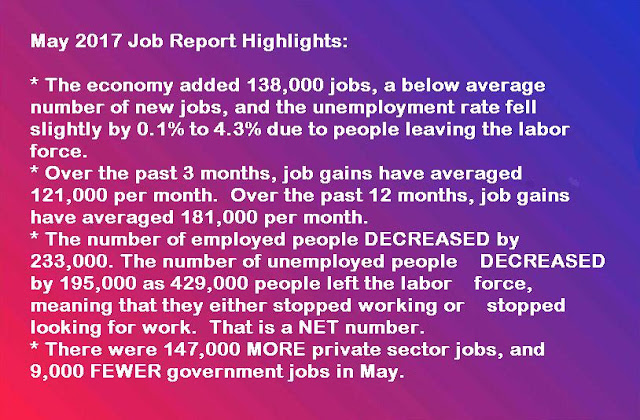 May 2017 Job Report Highlights:
From the BLS report:


"The change in total nonfarm payroll employment for March was revised down from +79,000 to +50,000, and the change for April was revised down from +211,000 to +174,000. With these revisions, employment gains in March and April combined were 66,000 less than previously reported. Monthly revisions result from additional reports received from businesses and government agencies since the last published estimates and from the recalculation of seasonal factors. Over the past 3 months, job gains have averaged 121,000 per month."


May 2017 reports: (Notation on the links will be changed to "UPDATED for May" when the updated reports become available later today or over the weekend.  Not all reports are updated every month.)