The December 2017 Jobs Report was released by the government's Bureau of Labor Statistics this morning, Friday, January 5, 2018.  Job growth slowed and the unemployment rate remained stable. 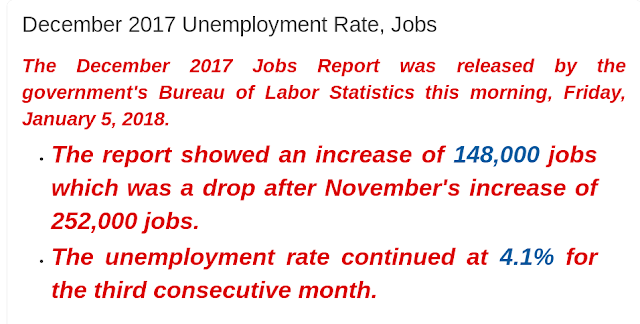 
Revisions from the last BLS report:

The change in total nonfarm payroll employment for October was revised down from +244,000 to +211,000, and the change for November was revised up from +228,000 to +252,000. With these revisions, employment gains in October and November combined were 9,000 less than previously reported. (Monthly revisions result from additional reports received from businesses and government agencies since the last published estimates and from the recalculation of seasonal factors.) After revisions, job gains have averaged 204,000 over the last 3 months.

Other December 2017 reports will be added and indexed here as they become available over the next hours and days.  Please check back!