All Jobs Reports & Numbers Indexed HERE! (May, all 2012 & 2011)
First time unemployment claims increased by 10,000 over those reported last week.  The four-week moving average increased (3,750) as well, though it didn't increase as much as the four-week moving average decreased last week (5,500).  As a whole, claims have been stable this spring, but they have tended slightly up over the past four weeks, with slight upwards revisions every week.
As usual, to put this into perspective, check out the red line on the chart below to see where jobless claims are now, in spring of 2012, compared to spring of the past three years.
From the current report:

The initial claims as announced last week were 370,000, so the claims from that week were revised upwards by 3,000. 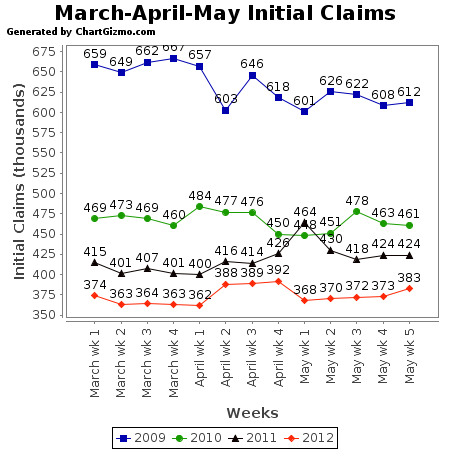 
Be aware that:  1.  These are first time claims, so people who have continued to receive benefits or who are losing any unemployment benefits would not be counted in these numbers.  2.  They are seasonally adjusted, so most variations caused by weather or holidays are already included in these numbers.  3.  As these are weekly numbers, they are more volatile than the monthly numbers.
The current numbers of initial claims continue to be the lowest springtime initial claims numbers since 2008.  Continuing regular state claims, from people who are continuing to claim unemployment through the initial 20 to 26 week regular unemployment program, has continued to drop.  In the week ending May 12th, in unadjusted numbers, they dropped to 3,117,110 from 3,141,342.

Many states have now "triggered" off of Extended Benefits.  Extended Benefits for those states, including California, Illinois, Florida, and several others, were due to end the weekend of May 12th.  On the current weekly report, as of the week ending May 12th, 312,434 people were still receiving Extended Benefits.  However, this number should decrease significantly as Extended Benefits have expired or are expiring for people in many states.  We can expect that the total number of people receiving unemployment benefits will declined to below 6,000,000 due to the end of those benefits.

Any questions or confusion, please leave a comment or email me!
Posted by Middle Molly at 7:58 AM