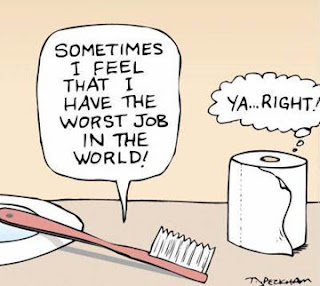 And if you believe that this is all Obama's fault, there's this bridge you might be interested in buying...

Did anybody notice that Romney seemed actually happy this morning while gloating about how "bad" the April jobs report?  He also seemed to decide that we need to add 400,000 to 500,000 jobs a month to have healthy job growth.  This from the man who was the governor when Massachusetts was 47th in the union in job creation?  Who made his millions (and possibly billions) by breaking up companies and getting rid of jobs?  I truly hope the American people will not fall for this b.s.
We know now that the Republicans have been plotting since inauguration night to make sure that Obama does not have a second term, and one of the ways they have been doing this is to stand in the way of anything that might make the jobs numbers improve faster than they are.  And I'm also sure they will do whatever they can to make good news seem tepid and to make tepid jobs news seem bad.
So, with that in perspective, let's look at this jobs report and jobs news this week:
1.  First of all, we only supposedly added 115,000 jobs this week, and only 130,000 private sector jobs.  Last month we only supposedly added 120,000 jobs total, 121 private sector jobs.  But now, as more accurate estimates become available, the statisticians keep adding:  February 2012 started at 132,697,000 jobs, was increased to 132,701,000 jobs, and now is at 132,720,000 jobs.  March started at 132,821,000 jobs and the current estimate is 132,874,000 jobs.  We don't know what might happen to these numbers, including the April jobs number, next month.  These jobs numbers were really never designed to drive the stock market one way or the other, as they really are preliminary estimates.
2.  In real unadjusted numbers, we now have 1,559,000 more people working than we had when Obama was inaugurated, and we have 1,479,000 more jobs than we did when Obama was inaugurated.  This means that, in "real" numbers, about 1,500,000 of your fellow Americans, friends, family members, neighbors, have jobs now vs. January 2009.
3.  In seasonally adjusted jobs, which is the number that all jobs reports use, there are now 35,000 more private sector jobs than there were when Obama took office.
4.  Obama has been pushing for a new jobs program that would help stem the loss of state and local government jobs, particularly the loss of jobs in teaching jobs, for almost a year now.  The Republicans have given him no help or support on this at all.  In the meantime, we have lost 100,000 local level teaching jobs (elementary, high school, and community college) in the past year and 270,000 local level teaching jobs since late 2009.  We've lost another 50,000 local government jobs in the past year, and that would include firefighters, policemen, and other local governmental workers.
5.  The spin is:  People are so despondent that they are dropping out of the work force!  Except that the Bureau of Labor Statistics actually asks people who are not in the labor force (not working and not actively looking for work) if they "want a job", and even this month, when we have 552,000 more people "not in the labor force", we have only a fairly small increase, 67,000 people, who "want a job".  We have to assume that most people who are no longer in the labor force DO NOT WANT A JOB.  We unfortunately don't know why people who were actively looking for work or working last month (in other words, people in the civilian labor force) are no longer in the civilian labor force this month, but the number of people who "want a job" has been generally going down over the past year.  More HERE (and a graph) about those people who are "not in the labor force".
6.  Because we have an aging population with a large number of people who do not want jobs, we may need to make different assumptions as to the number of jobs we need to get to relatively full employment.
7.  Romney is now saying that an unemployment rate of 4.0% is a goal for a full economy, even though we haven't had an unemployment rate of 4.0% or lower since the year 2000, when Clinton was in office.  And before that, in the late 60's, until Nixon had been in office a year.  Before that, in the late 40's and early 50's when women were generally not in the work force.
8.  The quality of jobs is important.  The country right now with the lowest unemployment rate is Vietnam.  Do we really want to become a Vietnam just to get our unemployment rate down?  My sense-- pure speculation-- is that many older people who cannot find jobs are leaving the labor force if they can possibly swing it...  rather than take lousy jobs.. if they could even get a lousy job.

More thoughts and reports as analysis continues over the next days and weeks...