Let's Get Rid of Medicare: Zachary Won't Need It!

A Blast From the Past:  The Republicans STILL Want to Dismantle Medicare, Privatize Social Security, etc.
Why We Still Need The Social Safety Net; Why We Can't Elect Trump and other Republicans to Shut These Programs Down  (Updated September 26, 2016):

The Republicans want to dismantle Medicare: 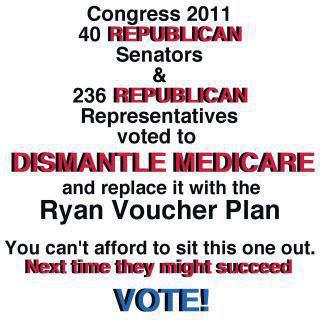 The Facebook conversation about Social Security and Medicare was lively with people talking about possible fixes to these programs and about their future financial issues:

"Medicare and social security can be fixed! The GOP doesn't consider fixing it an option."


Zachary wants to get rid of Medicare and Social Security because, well, he's special!

"Getting rid of it seems like a perfect fix to me. I can take care of myself better than the government can, clearly. I mean look, all this money I am paying into Social Security and Medicare and what am I going to get out of it 35 years from now? Even IF I get a little of what I am paying for in the end, I would absolutely get MUCH more if I invested it myself.


Some people are stupid, I understand that. If you don't trust yourself to prepare for your own future then by all means, give your money to the government and hope that they will take care of you.


But I'm not stupid, and I should have the CHOICE of investing my own money in my own future... it is called liberty! Maybe you have heard of it Linda? If not, you can read all about it in the Declaration of Independence and the U.S. Constitution ;)

And Linda, I think you are smart for wanting Medicare and SS to stick around. You are close to retirement. I can understand why you want me to keep paying into it... so that you can have that money for your retirement. I can't really hold that against you, after all, you paid into it your entire life too so that your parents generation could retire.


However, can you understand why I want to keep my money? I am afraid it won't be there when it is time for me to retire. Besides that, I KNOW I can create a better retirement for myself if I was able to invest MY own money in MY own retirement.


Robert is right. Eventually we need to stop this kick-the-can-down-the-road Ponzi scheme before we run out of road. It can't work forever and my generation, as it is seeming, is going to be the ones who get screwed. But what does your generation care? You'll be long gone by that time.... like true Ponzi scheme fashion. Shameful!


Ah, Zachary, the folly of youth!

Zachary, it is clear that you are young and don't understand what may yet befall you.

They changed the social security retirement age when I was in my early 30's.  We were all healthy, employed at good paying jobs, and we'd thought we'd keep that good health and those good high-paying jobs (that enabled us to save bundles) forever.  Very few people complained when they raised that retirement age because we thought,   "It won't happen to us; we'll never have to depend on social security."


What the future holds for us

Now many of those same healthy fully-employed people are disabled, sick, out of work (and not likely to be rehired).  Some wound up with children with disabilities or other problems who required (or still require) significant cash outlays for their care and upkeep.  I know people who were pushed out of their high-paying jobs when they were 50 or 55 and still had children at home to support.  They never again made the money they used to make, and, even though they had been saving regularly, they found that their savings were simply not enough to get through years of low-paying or no-paying jobs until retirement.  I know people who started businesses, sometimes after such a layoff, and the businesses went bust...  taking most of their retirement savings with them.

There is a reason that these social safety net programs were set up and there is a reason that those nasty old liberal Democrats (and some caring Republicans in the past) supported them:  BECAUSE WITHOUT HEALTH CARE and SOCIAL SECURITY FOR THE OLD AND the SICK, the ELDERLY and the SICK WERE LIVING IN ABJECT POVERTY, OFTEN SUFFERING AND DYING OF PREVENTABLE DISEASES.


Those who don't know history are destined to repeat it.

Many in the younger generation have NO IDEA what life was like without these "social safety nets" that you scorn.  Most of your parents, people in their 40's, 50's, and 60's, don't know.  The generation that remembers the misery of people who simply could not "save" for retirement is mostly gone.  It's too bad that you didn't pay attention in American history...   There were plenty of books, plenty of stories of people living in misery and squalor here in the United States.  We still have people in poverty, but it is nothing now like it was.

Zachary, maybe you are one of the superior few who can work enough and save enough and be lucky enough to never need Disability, Social Security, or Medicare... but first of all, as I said, you really have no idea what the future will hold for you, and secondly:  Don't you have one shred of humanity in you to want to make sure that the least of your fellow countrymen don't live and die in misery?  Remember that Social Security and Medicare are not necessarily for you.  They are for all of us.


Do the words "We the People" mean nothing to you.. despite your seeming desire to invoke the Constitution?
Posted by Middle Molly at 1:11 AM