8:03 p.m.  As mentioned below, the turnout was great, good weather and a fired up population.  There were reports of long lines at many polling places, meaning that people will still be voting after the 8 p.m. official close of polls.

Madison, Racine, and Milwaukee had particularly heavy turnouts (good for Barrett), but so did some suburban neighborhoods (good for Walker).


8:08 p.m.  Various sources saying "Too close to call!"  If so, it's already a victory for Barrett who was not leading in any poll.  From the NYTimes:

A victory by Mr. Barrett would be a surprise. Virtually every poll in recent weeks showed Mr. Walker leading in his bid to stay in office. National Democrats are hoping that a victory in the state would signal that voters are rejecting Mr. Walker's conservative approach to the country's economic problems.

8:17 p.m.  Watching the Twitter feed, Huffpo,  the NY Times, and JSOnline.  First results are in...  Walker leading Barrett with less than 1%.. meaningless at this point.


8:29 p.m.  7% in, Walker still ahead, but his margin is dropping as more returns come in from Dane County (Madison).

10:00 p.m.  About 500,000 votes not yet counted in Madison, Milwaukee, and Racine.  Though most networks have called the election for Walker, some news outlets feel it is premature.  Barrett is not yet conceding. 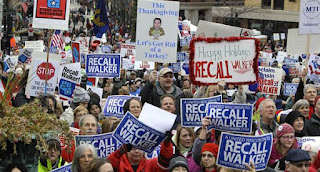 It's in the 50's this morning in Wisconsin, with temperatures expected to pull into the upper 60's to low 70's with just a "chance of rain" in a day with clear blue skies in most
parts of the state, just a few gentle rain clouds popping up now in the center of the state.  Good weather, like today, usually means a higher voter turnout.

Is it time to, as the ads on this clear morning say, "Show Walker the Door?"  Will Democratic challenger (and Milwaukee mayor) Tom Barrett finally can this man? (Scott Walker, that is, the Republican who has been in the governor's seat since January 2011.) 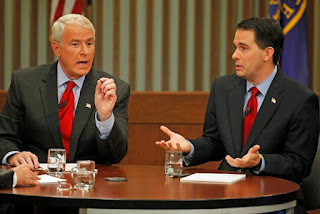 Here's what some in the press are saying:
MSNBC summarizes the race this way:


Wisconsin has become the front line in the battle between unions and reform-minded Republicans, and organized labor arguably has more on the line in Tuesday's recall election than any other constituency.

Since when do people who are against labor get to label themselves as "reform-minded"?  And why do big media outlets follow the same tune?

MORE HERE: Jobs in Wisconsin Under Scott Walker: May be worse than you think!

The truest quote in that article:


“I think it’s stating the obvious that it’s a hard time to be a union member – or any worker,” said Michael Podhorzer, the AFL-CIO’s political director.


The recall, said Podhorzer, will show that it was Walker who "overreached." He said that Republicans had always been anti-labor, but the rhetoric has become especially "virulent" as of late.

"I think they are at war with unions. Everything they’re proposing to do is to gut the gains we’ve made for middle class families," said Saunders.


On jobs, taxes, education, health care and unions, the candidates are already marking out positions that differ sharply.

David Riemer, a former top administrative and budget officer for Democrats in both the state and the city of Milwaukee, said the difference is that Walker is focused on holding down or cutting taxes and helping corporations to the exclusion of all other concerns, such as the quality of public services.

In his own words, Walker talks about the role of government by emphasizing limits on it:

"Government is there to do things that we can't do on our own," Walker said. "For the most part, it's supposed to stay out of our lives. It's why the state constitution here in our state says modesty and frugality in government leads to freedom and prosperity."

Unfortunately, to Republicans, "modesty and frugality" usually means modesty and frugality in terms of helping the middle and working class people while not being "modest and frugal" in helping big corporations and big business.  And that "freedom" hasn't led to much prosperity lately.. unless you are well off to begin with.

"Government is there to make sure we protect our liberties, that we have public safety, education . . . roads, transportation," Barrett said. "It's to make sure we have a civilized society where everyone has an opportunity and people are respected."

Well, that makes sense.  Can you still be "modest and frugal" and make sure that everybody has a reasonably fair chance to achieve their life goals?
The JSOnline article includes a breakdown on the differences between the candidates.  One comment in the "Jobs" section:

Walker said he wants to hold down costs for businesses from taxes and regulations and promote skilled workers in the labor market and good infrastructure.

One of the things that so many conservatives and Republicans forget is that there is a reason behind most regulations.  Yes, I'm sure there are some goofy regulations...  But regulations were often put in place to protect the environment, workers, or consumers or to keep people honest.  They tend not to just "pop up" from the ether.  And those "skilled workers" and "good infrastructure" costs money.. that means taxes.


But there are important reasons to doubt whether Mr. Walker’s fate tells us much about whether President Obama’s chances of winning Wisconsin, much less whether it serves as a model for how the rest of the country might be feeling in five months.
That’s not to say it’s unimportant or irrelevant to politics more broadly. There are clearly some lessons that can be drawn by both sides after the outcome in Wisconsin is known (see below for some of those lessons).
But first, here are five reasons why the results in Wisconsin might not say much about anything except Wisconsin:

They mention:
Let's hope the Times is right about this.
E.J. Dionne in the Washington Post  concludes:

Walker is being challenged not because he pursued conservative policies but because Wisconsin has become the most glaring example of a new and genuinely alarming approach to politics on the right. It seeks to use incumbency to alter the rules and tilt the legal and electoral playing field decisively toward the interests of those in power.

Dionne discusses the unions and the difference between being a "tough negotiator" with the unions vs. simply attempting to get rid of them.  He concludes:


This recall should not have had to happen. But its root cause was not the orneriness of Walker’s opponents but a polarizing brand of conservative politics that most Americans, including many conservatives, have good reason to reject.


The real question, raised by Barrett, is whether we are condemned to a permanent 50-50 kind of politics in which neither side ever has a chance of assembling a program that can command wider support. Is such consensual politics a thing of the past?

And I must add:  Why is the country so divided?  Don't we really all have the same basic goals:  The freedoms guaranteed in the Constitution, a decent home and fairly comfortable life, a decent education for our kids, a decent job in which we will be paid a decent wage in reasonable working conditions, good health care throughout our lives, the opportunity to start and succeed (or fail) in a business, adequate transportation, modest luxuries or vacations here and there, and finally, a dignified retirement?  And are there that many people who think that we shouldn't provide some kind of reasonable existence for people who are disabled or just plain old?  And some kind of equality of opportunity for all kids?
Are there people out there....  a lot of them... who don't want this for themselves or the rest of us?

I just outlined my idea of the "American Dream".  I think that this country isn't special unless that dream is alive and well for all of us.  Clearly, there are responsibilities along with that dream:  You have to be willing to work to the best of your ability, and some will always have more of these things than others.
But somehow the Republicans have been able to divide people who basically want the same thing.
That's the big issue, both in Wisconsin and in the country.
Posted by Middle Molly at 11:20 AM