How Many Jobs Has Obama Created or Lost? (June 2016 Update)

The following report is outdated.  It has been updated with current data HERE.


How many NET jobs created or lost under Obama* as of June 2016? How many private sector jobs have been lost or added during Obama's presidency? 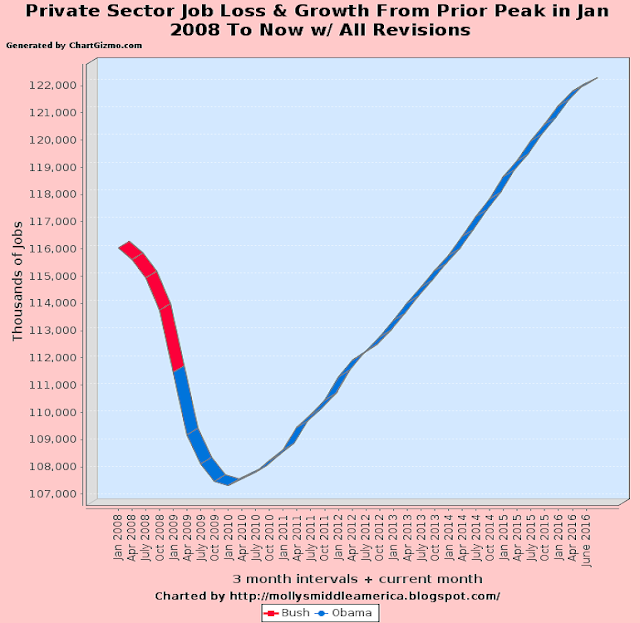 Have any private jobs been lost (net) over the past 76 months since February 2010?

Have any jobs been lost (net) over the past 69 months since September 2010?

All June 2016 highlights and reports are listed HERE.

Let's get something straight:  Jobs are lost every week and every month. People are fired, people are laid off, businesses or locations are closed and everybody is let go.
Also people quit every week.  You yourself, dear reader,  may have quit a job at some point in time.
But people are also HIRED every week and every month.  New businesses open, businesses expand, businesses replace people who have left or been fired.  Every week.  You yourself, dear reader, may have been hired for a job at some point in time. This happens in good times and bad.
Yes, even in bad times, people are getting hired.  Even in good times, people are let go.
Now:  The monthly jobs report, upon which this article is based, presents estimates based on surveys as to how many jobs are gained or lost in a given month.  Those numbers are based on the number of new jobs (people getting hired, businesses opening) MINUS the number of jobs that have been cut (people getting fired, people quitting, businesses closing or cutting back).

The above jobs numbers are from the BLS jobs report of June 2016, which was released in early July 2016.  The surveys used to gather these numbers are taken as of the week which includes the 12th day of the month, in this case, June 12, 2016.