The June 2017 Jobs Report was released by the government's Bureau of Labor Statistics this morning, July 7. This is a strong report, seeming to reverse the weakness seen in the prior few months.  Again, one month does not make a trend, and this report, while strong, is not better than most of the job reports during the Obama years.

The economy has been adding jobs consistently for 7 years.  In fact, in 45 of the 84 months between early 2010 and the end of the Obama Presidency, 200,000 or more jobs have been added.

The job reports under Trump (since February) seem to continue this trend of consistent addition of jobs and decline in the unemployment rate. 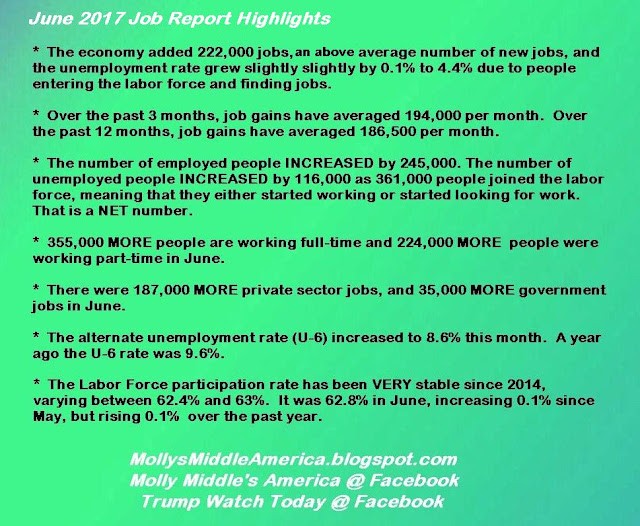 READ MORE HERE!
Posted by Middle Molly at 8:38 AM No comments:

It's Jobs Day in America!


It seems like a long time since the May jobs numbers, but finally we eagerly anticipate the jobs numbers for June 2017.

The payroll processor ADP estimates that we added 158,000 new private sector jobs in June 2017.  Their estimates have been high compared to the BLS (Bureau of Labor Statistics) numbers for the last few months; we'll see what happens tomorrow morning.

Unemployment claims numbers continue to be very low, though not quite as low as they were in late May.

Reuters reports that the pundits estimated that we would add 185,000 private sector jobs, so the 158,000 reported by ADP was a disappointment and was largely responsible for the drop in the stock market.

We'll see what we will see tomorrow morning, 8:30 a.m. Eastern Time, very close to the time that Trump will be meeting with Putin in Germany.  So it will be a busy Friday morning. 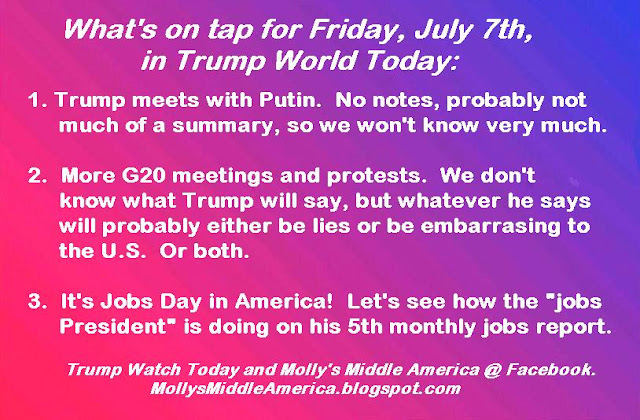 Posted by Middle Molly at 1:46 AM No comments: