Below are preliminary state rankings in jobs and employment for 2012.

These are preliminary numbers which will be modified next week Friday (March 1st) when state benchmark revisions are released.  I have not yet added unemployment rates or changes in unemployment rates to these lists, so watch for that information as well.

"Jobs" are the number of jobs reported by non-farm employers in a given state.

"Employment" is the number of people who have reported themselves as employed in a state.  "Employed" includes people who are self-employed, people working on farms, as well as people who are employed by payroll-tax- paying employers.

North Dakota, for instance, continues to lead in job growth, but it is only 19th in growth in number of people employed--  We can theorize that many of the new jobs in North Dakota went to people who are living elsewhere, and, for now, either commuting or only living temporarily in North Dakota.  Over all, there are more jobs (421,000) than there are people who say they are employed living in North Dakota (380,000).


The top ten states by employment growth (as a percent) in 2012:

The bottom ten states for jobs growth (as a percent) in 2012:

The bottom ten states for employment growth (as a percent) in 2012:

Total Jobs Added in the United States in 2012:


Total Employment (Workers) Added in the United States in 2012:

Posted by Middle Molly at 5:01 PM No comments:

How Many Government Jobs Lost or Added Under Obama? (Updated for December 2015)

How Many Government Jobs (Workers) Have Been Lost Since Obama Took Office?

How Many Government Jobs (Workers) Have Been Gained Since Obama Took Office?


Total numbers of government jobs, which declined precipitously in 2011-2012, have stabilized and we have added about a hundred thousand government jobs this year.

The total number of local jobs (counties, cities, towns, villages) declined for the past 5 years, but the decline stopped in mid 2013, and we have seen increases in 2014 and 2015.  Local education jobs (think public schools and community colleges) declined for 4 years, but experienced small increases in 2013 through early 2015.  It has declined slightly in the last half of 2015.  This sector, which is the largest government jobs sector, experienced the largest decline in jobs during the recession, and is down about 3.7% from the time that Obama was inaugurated.
Posted by Middle Molly at 10:46 AM 11 comments:


Here are the latest numbers with all revisions:

Posted by Middle Molly at 7:46 PM No comments:

How Many Jobs Were Created or Lost in January 2013?

What Was the Unemployment Rate When Obama Took Office? (January 2013 update)

March 2013 reports will be released Friday, April 5th.  Check back then! 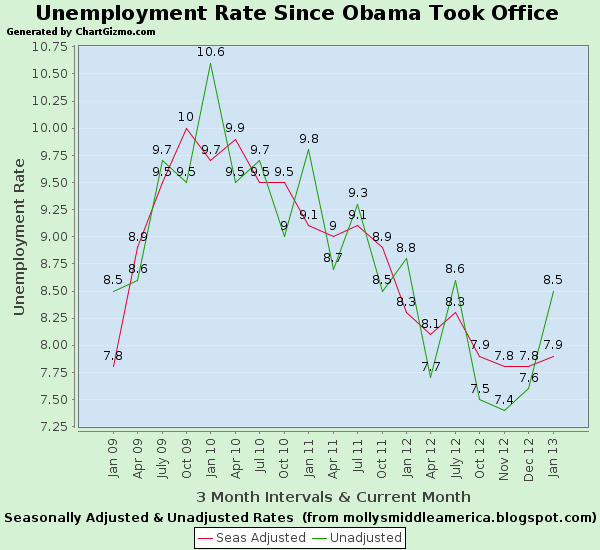 How Many Jobs Were Created or Lost in December 2012?

28,000 more people reported themselves as working in December 2012.

How Many New Jobs Were Created or Lost Last Year in 2012?


Here are the latest numbers with all revisions:

Posted by Middle Molly at 2:13 PM No comments:


This report has been updated for JUNE 2013 HERE!!

How many jobs (total, private, and government) have been lost or gained since Obama was inaugurated?

*  These are all net figures, meaning that they represent the total number of jobs at the end of a reporting period.  All losses have been subtracted from all gains and vice verse.

*  For the purposes of comparison, jobs are being added at a faster clip under Obama than under George Bush at the same time in his presidency.  At this point in Bush's presidency (January 2005), there were still 150xx,000 FEWER jobs than when he was inaugurated in January 2001 (compared to 84xx6,000 MORE for Obama).  The number of jobs didn't eclipse the number when Bush was first inaugurated until February 2005, in Bush's second term.


How Many Jobs Lost or Added Under Obama? (January 2013 update)

How Many Jobs Were Created or Added in 2012?


How many PRIVATE sector jobs have been lost or gained since Obama was inaugurated?

*As of January 2013,  jobs are being added at a faster clip under Obama than under George Bush at the same time in his presidency.  At this point in Bush's presidency (January 2005), there were still 946,000 FEWER private sector jobs than when he was inaugurated in January 2001 (compared to 1,913,000 MORE for Obama).  The number of private-sector jobs didn't eclipse the number when Bush was first inaugurated until June 2005, in Bush's second term. 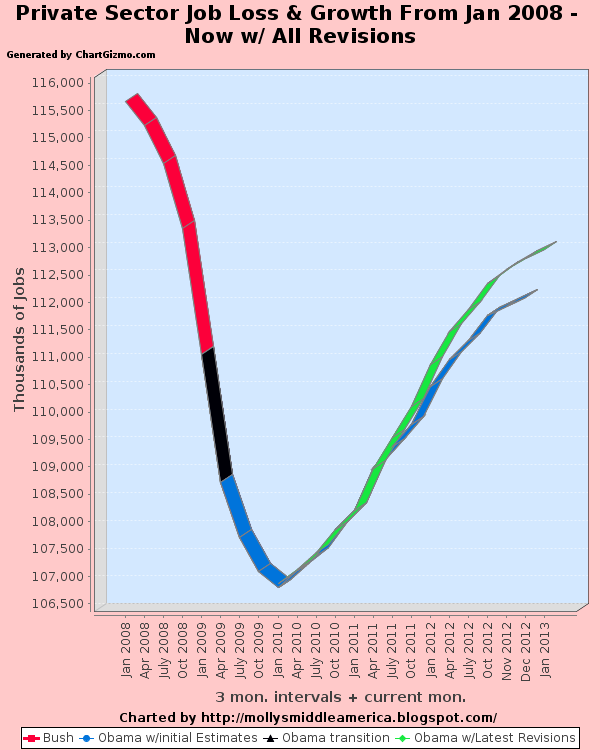 How many GOVERNMENT jobs have been lost or gained since Obama was inaugurated?  (Government jobs include federal, state, and local government jobs.)

How Many Private Sector Jobs Were Lost Because of Obama?

Should we "blame" Obama for not being immediately able to stem the tide of private sector job loss in 2009?  If a house is burning out of control and the fire department comes to put out the fire, it continues to burn until it is brought under control and cooled down, right?  Now.. would you blame the fire department for the continued fire and the time to put it out after the firefighters arrive on the scene?

Well, you might, but I wouldn't:  Here's my reasoning:  Burning Down the House!

So my answer to this question would be a big, fat ZERO.  I do NOT feel that Obama is to blame for any loss of jobs between January 2009 and February 2010.  If you think he is, please leave a comment and explain!