Are the Unemployed Dropping Out of the Labor Force in Great Despair?

Until we've had a chance to see exactly which groups of people, people representing which age or educational groups, left or joined the labor force; until I look at the flows data to determine if the people who are leaving the labor force were previously employed or unemployed or new to the labor force, claiming that people are "giving up" their job searches, as many short-sighted writers are proclaiming this morning, is just plain folly.

Please remember also that there are employment "flows" data that show us that, over the past couple of years, more people who were employed are leaving the labor force vs. people who were unemployed. The decrease in the labor force participation rate is generally being caused by people leaving employment.  We can think "retirement".  We can also think of people going to school.

I did look at the table on 16-24 year olds put out monthly by the BLS, and I compared it to the report from last month:

But as I said, we shouldn't jump to any conclusions about the drop in the number of people in the labor force.. and, above all, we shouldn't conclude that people are "dropping out" of the labor force in deep despair. Absolutely no evidence of that.
Posted by Middle Molly at 4:08 PM No comments:

The following are outdated.  They refer to numbers and reports for April 2014.  For current reports and numbers, please use the link above. 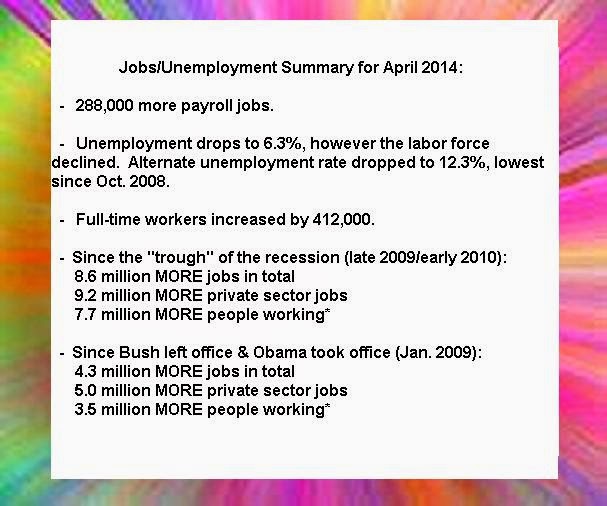 The following April Jobs Projections were posted earlier in the week:

"The U.S. Labor Department’s monthly jobs report is due out Friday and the numbers are widely expected to show some improvement over the March figures, when 192,000 jobs were added to the economy and the headline unemployment rate held steady at 6.7%.Gus Faucher, senior economist at PNC Financial Services Group, predicted 200,000 new jobs were added in April and that the unemployment rate will tick lower to 6.6%. A broader consensus of economists is even more optimistic, forecasting the addition of 215,000 new jobs.Faucher predicted “continued solid growth, not fantastic but more than enough to absorb new entrants into the labor force plus some of those who’ve been unemployed.”"

Just a note:  We only need about 65,000 to 80,000 jobs a month to account for population growth, as almost all of the population growth over the last decade has been in the older age groups, the age groups in which people start to leave the labor force due to retirement.

Economists surveyed by Action Economics predict that U.S. payrolls overall, including governments, increased by 210,000 jobs last month. Average monthly gains for January through March were 176,000.  Economists also predict Friday's report will show the unemployment rate fell to 6.6% from 6.7% in March. The latest jobs data released Thursday showed initial claims for unemployment benefits rose for the third straight week to their highest level since late February.  First-time claims last week reached a seasonally adjusted level of 344,000, up 14,000 from a week earlier.  Economists' median forecast predicted a drop to 320,000, according to Action Economics survey.  Claims have been climbing since early April when they reached a seven-year low of 301,000, but less than half their peak levels (which) were over 600,000 a week in 2009.  Jobless claims are a proxy for layoffs, so higher numbers could suggest a weakening labor market. But analysts caution that weekly unemployment claims can be volatile, not least during the Easter-school spring break period.

Just a note here as well:  I definitely want to emphasize that comment on volatile claims numbers.  Seasonal adjustments are most hinky around holidays that move, such as Easter.  And the unadjusted numbers do not show any alarming increases.  So it would not be wise to make any predictions about layoffs until we have a couple more weeks of jobless claims to consider.

April 2014 jobs numbers and unemployment reports were released Friday morning, May 2nd.  Graphs, details, and analysis will be published over the weekend and early next week.

Please check back for latest numbers and charts!
All April highlights and reports are listed HERE.
Posted by Middle Molly at 1:39 AM No comments:

How Many Jobs Were Created or Lost in April 2014?

How many full-time jobs lost or created in 2014? HERE!


All April 2014 highlights and reports are listed HERE.

Posted by Middle Molly at 1:38 AM No comments:

April 2014 jobs numbers and unemployment reports were released Friday morning, May 2nd.  Graphs, details, and analysis will be published over the weekend and early next week.

Please check back for latest numbers and charts!
All April highlights and reports are listed HERE.

Posted by Middle Molly at 1:37 AM No comments:

How Many Jobs Have Been Created or Lost Under Obama? (April 2014 update)


How many NET jobs created or lost under Obama as of April 2014?  How many private sector jobs have been lost or added during Obama's presidency?

How many new jobs in the last 5 years since Obama was inaugurated?  How many Americans were working or employed when Obama took office... compared to now?

Numbers for April with latest revisions: 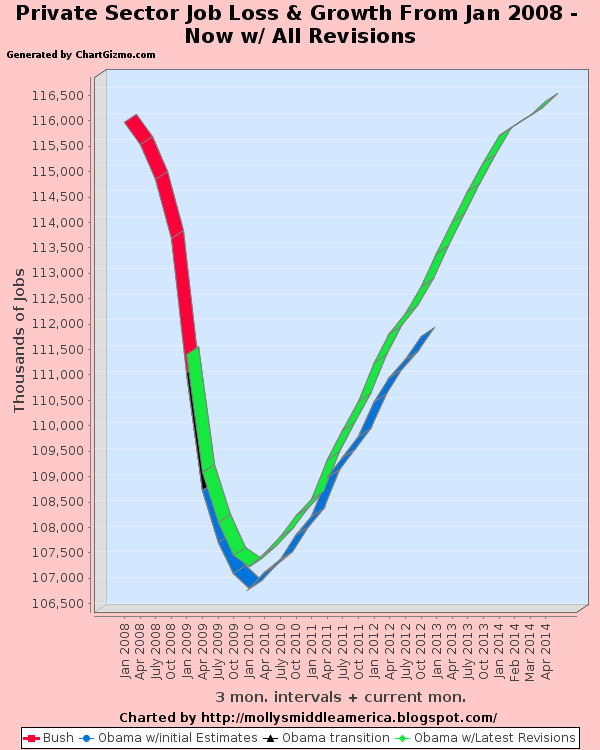 Have any private jobs been lost (net) over the past 50 months since February 2010?
NO!

The above jobs numbers are from the BLS jobs report of April 2014, which was released in May 2014.  The surveys used to gather these numbers in March are taken as of the week which includes the 12th day of the month, in this case, April 12, 2014.

Posted by Middle Molly at 1:36 AM No comments:

What was the Unemployment Rate When Obama Took Office Compared to Now? (April 2014)

This report updated for May 2014 HERE. 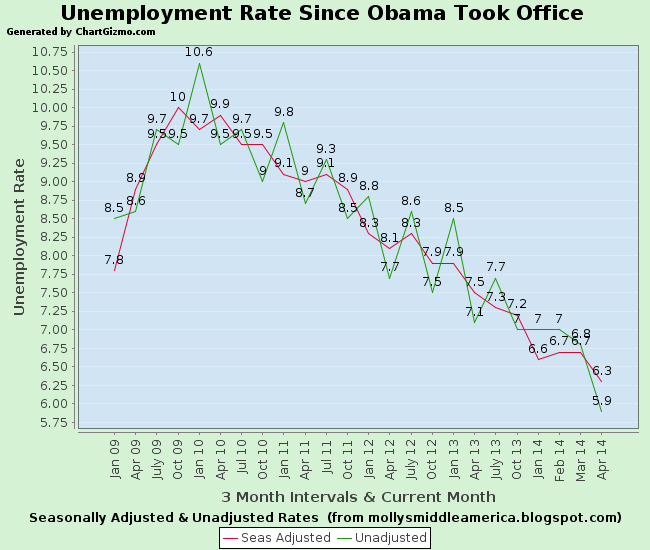 READ MORE HERE!
Posted by Middle Molly at 1:35 AM No comments: