Obama caused the Recession?  The economy tanked BECAUSE Obama was elected?

I'm stunned to read comments and articles that suggest this.  I had not received such a comment here... until today.

So here is the comment I found this afternoon on my May article summarizing private & government jobs numbers:

Obama is certainly to blame. The economy started to tank BECAUSE he was elected in November. His anti-corporate agenda was well know, and business owners everywhere began to scale back in preparation of what was to come.

Thankfully, Obama was talked out of rolling back the Bush tax cuts, so the gaping wound was partly bandaged. Companies stop the huge layoffs, and that's why we've seen the whopping .05% "growth" that we've seen.

However, real growth won't take place until Obama is removed from office. I'd wager my house on the fact that if Romney wins the election in November, unemployment will go down, and interest rates will finally start to move back up. The US economy is based more on consumer and corporate confidence than anything that a president could do. And there is no confidence when there's a Democrat in office.

Job Gains and Losses from January 2008 until now: 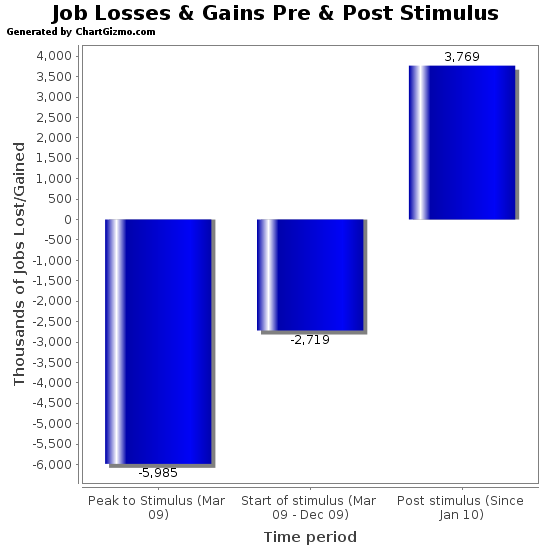 I added the above chart so that we can all see what Obama walked into.. just in case anyone else out there seems to have forgotten.  The "peak" of jobs was in January 2008, a full year before Obama took office.  We lost 4.4 million jobs before Obama stepped one foot into the Oval Office.  No President since Roosevelt has inherited an economy in such a calamitous condition.

Now, since the guy commenting probably lives in his parents' basement, I wouldn't take his "wagering the house" comment too seriously.  Or perhaps he is one of Romney's sons.. upping the $10,000 bet that Romney wanted to make with Rick Perry at one of those despicable Republican debates.... Even Rick Perry wasn't clueless enough to accept.

My reply was a bit stronger than usual because this is such an absurdity:


Are you a complete and total blithering idiot? I don't like to call names, but some people are just so, so clueless..... it almost makes me scream!

Did you just crawl out of the cabbage patch in January 2009? No other excuse for your absurd and completely wrong allegations.. definitely among the worst and most clueless comments I have had on my blog to date....

The housing bubble BURST in summer 2006... even before the Democrats took over Congress!

We reached the PEAK of jobs in January 2008!!! That was months and months before Obama was elected!

Things really fell to pieces when Lehman Brothers went bust and the banks were all on the verge of insolvency in September 2008. Obama was the nominee by that time, but he did NOT have the solid lead in the Presidential race until AFTER the economy fell apart in mid September.

Here.. check the 2008 presidential polls towards the bottom of this page:

Obama was not "talked out of rolling back the Bush tax cuts"(which have seriously harmed our economy). The Republicans held the unemployed hostage and would not agree to the sorely-needed unemployment insurance extensions until the deal about the Bush tax cuts was made.

As you can see from ANY chart of employment/unemployment/jobs numbers, the extensive layoffs slowed almost as soon as Obama took office.. and we started to GAIN jobs and workers in early 2010, well before the deal with the Bush tax cuts, which occurred in December 2010.

You know absolutely nothing about anything you have written so far.. aren't you embarrassed to be so completely wrong about EVERYTHING?

Did you complain as much about Bush when he was in the third year of his presidency? At the same point is point in his presidency, we were still DOWN 1.6% in the number of private jobs since he took office. Or are you now going to deny that you supported Bush?

You can look at this article comparing job growth Bush vs. Obama .

So if the Republicans bring confidence to all of the people who will get screwed by a Republican economy, why wasn't job growth much better during the Bush years than it has been during the Obama years? The economy and the jobs numbers were propped up by the over-heated housing market (and the poorly regulated financial market) during the mid 2000's. It was a "bubble"... and the whole thing came tumbling down. I know; I know; you are going to resort to stupid right-wing talking points that somehow Barney Frank was responsible for the housing bubble.

And if Republicans are so wonderful for the economy and so bad for consumer confidence, why are so many more jobs generally created when the Democratic presidents are in office?

Check out this link.. though I have seen others:

Anonymous, everything you have written has been simply wrong. You need new sources of information (or you are intentionally lying?). Someone is either lying to you, or you want to be lied to. Stop being gullible and stop thinking the Republicans have ANYTHING to offer you.

The waning years of the Bush administration should have shown you all you need to know, but instead of wising up, you somehow listened to the right-wingers and found a way to blame it all on the Democrats.

I'm not sure what to say to people like this man (woman?).  He/she obviously has his/her mind made up.  He/she probably believes that rampant income and wealth inequality is a good thing for the U.S.  And that there is nothing racist about the right-wing's hatred for Obama.

When people start blabbering about Obama "causing the recession", just show them the above chart, not that it will make any difference to people who are very close-minded.  Remember:  We started losing jobs in January 2008.
Posted by Middle Molly at 12:08 AM