Rush Limbaugh Has Hurt You, Me, and the United States

"Rush Limbaugh is just entertainment.  He uses absurd examples to be funny", writes a friend.

Update May 8, 2015:  I wrote this column three years ago, but I can't find reason to change one word.  Rush is still hateful, still outrageous, and still destructive to this country.  I do think that he says much of what he says for ratings and listeners, but that doesn't mean that he isn't harming this country every time he is on the air. 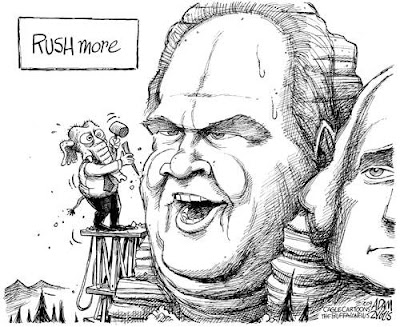 
I don't listen to the guy either.  I used to listen to him from time to time,  but he was too negative, too revolting.  I haven't tuned into him for several years now.


But even though I don't listen to him, Rush is important.  He's important to all of us..to all of us who care about our futures or about the future of this country.

Whether you lean Republican or Democrat, whether you listen to Rush or have never tuned your dial to him in your life, this man has hurt you and he has hurt me.


He is one of the reasons why this country is so polarized and why the rhetoric is so mean and so divisive.  He is one of the reasons why it is so hard to listen to each other and hear the other side. He doesn't just discuss issues; he twists things, he libels, he verbally assaults people.  His attacks on President and Mrs. Obama are outrageous and full of half truths and innuendo; and many millions of his listeners, many millions of our fellow citizens and voters, can only see the world through the filter of a man whose intent is to obfuscate and slant the truth in the pursuit of bundles of cash.

He engages in legal lying;  He legally spews garbage over the airways.  He pollutes our public discourse and hinders our ability to come together and figure out what is best for our country.  He appeals to the basest traits in the electorate.  Is there anybody out there who doesn't see that the political realm in our country has become more hostile and less constructive since 1988 when Limbaugh first took to the airwaves?

You May Not Listen to the Guy.. But What About Your Neighbor?

Whether or not we listen to the guy, we are all hurt by what he says because our neighbor in the next house may be listening to him.  That gentleman next door who is an avid Rush listener may become increasingly polarized and may increasingly begin to take and endorse positions that are contrary to what is healthy for him and for all of us... positions based on deception, fabrication, and stereotypes.


For Rush has, over the last 25 years, managed to tap into the frustration of a whole segment of the population who ARE being harmed by the relentless concentration of wealth and income inequality:  But he turns that frustration around and funnels it back against people and political parties who might help those frustrated people! He is a big reason why this country is going backwards instead of moving forward. He has convinced his audience that the problem isn't the concentration of wealth and decreasing opportunity for the middle and working classes.. but instead the problem is black people, women, immigrants, unions, gay people, and Democrats.  Anyone who might need help from time to time is an enemy according to Rush and his minions.  Anyone who might help to get our country back on track is an enemy according to Rush and his minions.

We are in danger of becoming a third world country, and much of this is due to Rush.

Unfortunately, too many people either lack the time or are too intellectually lazy to research or investigate the various issues and determine what is the truth.  And others, as I mentioned above, are very frustrated and can't see the Truth. Quite frankly, it says really disturbing things about the American public that people listen to this man and believe and support him.


As a friend said:


People have become too willing to accept bullshit as angel-food cake because some clown on the radio screams that it's so.

If you ignore him, are you complicit?

Many of us who disagree with Rush have just ignored him.  We have let him get away with rhetoric that is absolutely outrageous, and that may even make us complicit in this mess-- just a little.


So, yes, we can and should not listen to the guy.. but, listen or not, his negativity influences all of us and we should not continue to ignore the lies and the slander.  He's hurt you; he's hurt me; he's hurt our children. Nobody in this country can escape his influence.

(I just came across this blog with excellent commentary about the recent events concerning Limbaugh.  As I said, I haven't listened to Rush at all for several years now. But based on some of the comments  related in this blog, it is clear that Rush has consistently and regularly crossed the line of public decency, particularly regarding women.   If you remember Limbaugh's attack on Sandra Fluke, MediaMatters listed every last slur that Rush visited upon this young lady.  It was worse than I thought.  Please read for yourself HERE.)

For Your Reading Pleasure:

How Many Jobs Has Obama Created or Lost? (May 2015 update)
Obama's Phony Recovery? Or Lying Republicans?
What is Poverty in America?
All Latest (2011 through 2015) Jobs Numbers and Reports Indexed HERE