First time unemployment jobless claims increase by 8,000 for week ending July 28th.  Despite this increase, the four-week moving average # of claims decreased  by 2,750.

For the week ending July 14th, 5,964,553 people were receiving unemployment benefits under one of the programs that are available (regular state, extended benefits, federal extended unemployment compensation, or a few other smaller programs).

How Many Jobs Have Been Created or Lost Under Obama? (June update)
What Was the Unemployment Rate When Obama Took Office? (June update)
All Jobs Reports & Numbers Indexed HERE! (June, all 2012 & 2011)
First time unemployment claims increased by slightly by 8,000 over those reported last week.  Last week's claims were revised upwards by 3,000.  The four-week moving average decreased by 2,750.  Initial claims have declined four out of the last six weeks.  As a whole, claims have trended downwards this summer since mid-June.  There have been slight upwards revisions in the initial claims numbers in eleven out of the last twelve weeks.  (The chart below shows REVISED claims numbers.)

As usual, to put this into perspective, check out the red line on the chart below to see where jobless claims are now, in spring and summer of 2012, compared to spring and early summer of the past three years.

The initial claims as announced last week were 354,000, so the claims from that week were revised upwards by 3,000. 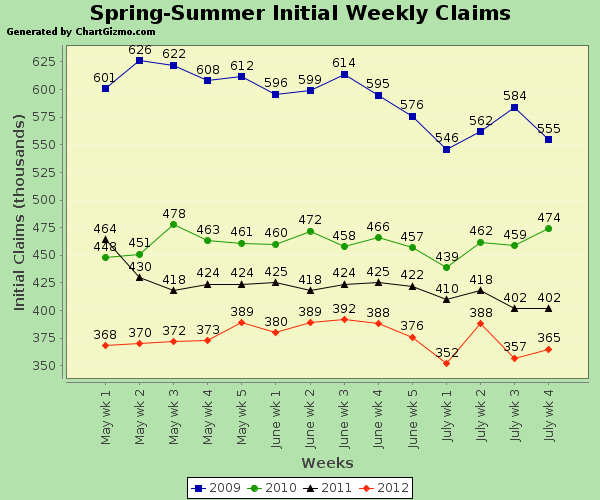 In two months, 96.2% of the people who were receiving Extended Benefits are no longer receiving such benefits.  We do not know how many of these 337,372 people found jobs or how many have another source of income.
To reiterate, while a decrease in the number of people FILING for initial claims is a good thing and indicates that fewer people are being laid off, a decrease in the TOTAL number of people getting unemployment insurance may only show that fewer people are eligible for unemployment insurance benefits.

Any questions or confusion, please leave a comment or email me!
Posted by Middle Molly at 10:03 AM