We have a trend...  Unemployment claims have declined four out of the last five weeks.


First time unemployment jobless claims decreased to 332,000  for the week ending March 2nd.   This is a decrease of 10,000 but, more important, it appears to mark a solid trend of weekly first time initial claims below 350,000.  It also shows that so far employers are NOT laying people off in response to the sequester; however, as was mentioned last week, the effects of the sequester on employment may occur farther down the road.

The four-week moving average # of claims decreased by 7,000 after decreasing by 6,750 last week.  First time claims continue at about the same level that they were in late 2007 to early 2008.

For the week ending February 23rd, 5,619,860 people were receiving unemployment benefits under one of the programs that are available (regular state, federal extended unemployment compensation, or a few other smaller programs).  This was an increase of 217,967 continuing claims since the previous week.  The increase in continuing claims occurred in both the Regular State Claims and the Federal Extended Unemployment Benefits program (the "Tiers").

Percent of Unemployed People Receiving Benefits increased to about 45% for the week ending February 23rd. 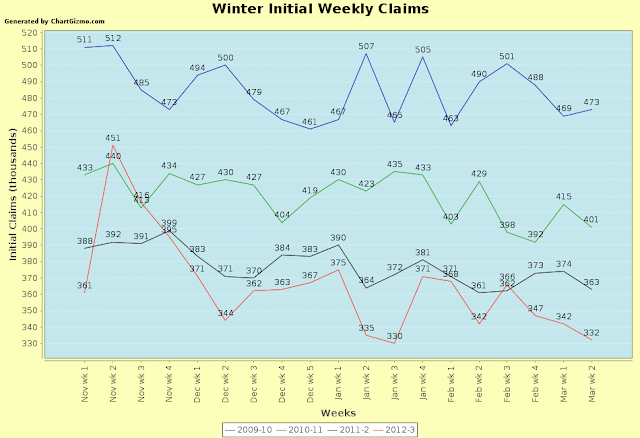 First time unemployment claims decreased by 10,000 over those reported last week.  Last week's initial claims numbers were revised upwards by  2,000.  There are usually slight upwards revisions  (1,000 to 3,000) in the numbers of initial claims in most of the weeks of the past several months.  (The chart above shows REVISED claims numbers.)


The initial claims as announced last week were 340,000, so the claims from that week were revised upwards by 2,000.

Total number of people receiving unemployment insurance is 45% of the officially unemployed for the week ending February 23rd.

Extended Benefits claims were only available in Alaska during the week ending February 23rd.

Therefore, over the last ten months, 99.8% of the people who were receiving Extended Benefits are no longer receiving such benefits.  We do not know how many of these 350,000 people found jobs, how many have another source of income in the family, and how many have nothing.