Yes, the government shutdown did hurt employment for a number of weeks.

All we need to do is to look at the weekly unemployment claims over the past two months.

Back in mid-September, the number of claims was heading down with a bullet. 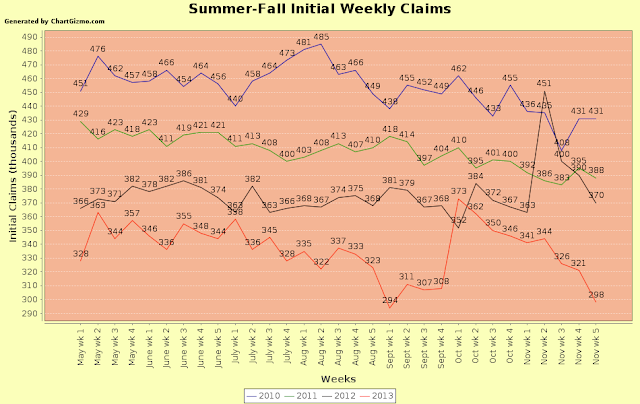 Look at the numbers for September 2013 (the red line) in the chart above.  Notice what happened in the first week of October.  Though government workers are back to work, the number of requests for unemployment insurance has only now, two months later, approached what it was in September.  The increase in claims in October over September is probably due to a ripple effect as the shutdown and the concerns about the debt ceiling standoff have percolated throughout the economy.

(Even though the weekly initial claims numbers are seasonally adjusted, these numbers are always a bit volatile and should only be analyzed in terms of a trend over a period of weeks.  See the graph above.)


First time seasonally adjusted unemployment jobless claims declined to 298,000  for the week ending November 30th, a decrease of 23,000 claims.  New weekly claims had stayed below 350,000 for three months from July until September.  Then came the government shutdown in October.  Though new claims have decreased since the first week of October, we are only now, two months later, at the same levels of initial claims of September.


The four-week moving average # of claims, which smooths some of the week-to-week volatility, is finally decreasing as the weeks of high numbers of claims in October are dropped from the calculation.  The moving average decreased by 10,750 last week after increasing by 6,250 the week before.  It is now 322,250.

Overall, initial claims are now at about the same level they were six years ago, in early to mid 2007. (Unemployment claims started to climb in October through December 2007.)

The chart at the top of the page is one of the BEST charts for understanding and observing changes in the weekly initial claims numbers over time.  This year (red:  2013) and the past three years (blue:  2010, green:  2011 and black:  2012) are marked in different colors.  You can see that, as a trend, first time claims for unemployment have declined from one year to the next, even though there are variations within the year.  The number of initial unemployment claims had been on a downward trajectory in summer, but it increased steeply during October, though it is now decreasing again.

Be aware that:
Continuing Claims?

For the week ending November 16th, 4,096,901 people were receiving unemployment benefits under one of the programs that are available (regular state, federal extended unemployment compensation, or a few other smaller programs).  This was a increase of about 183,000 claims in total since the previous week.  Regular state claims (the first 19 to 26 weeks of claims) also increased by a total of 134,000.  The number of people receiving benefits under the Federal Extended Benefits program (the "Tiers") increased about 46,000.

Benefits Now vs. a Year Ago?


About 860,000 FEWER people are receiving unemployment benefits now vs. one year ago.  We do not know what has happened to the people who are no longer receiving benefits; we do not know how many of those 860,000+ people found employment, how many retired, and how many are still looking for work.  We do know that:

If you are receiving benefits, you may be interested in these reports:

Current Spring Initial Claims Continue to be the Lowest Since  2007.

As usual, to put all of this into perspective, check out the red line on the chart at the top of the page to see where jobless claims are now, in 2013, compared to the past three years.

First time unemployment claims decreased by 18,000 over those reported last week.  Last week's initial claims numbers were revised upwards by 5,000 claims.  There are usually slight upwards revisions  (1,000 to 3,000) in the numbers of initial claims in most weeks.  (The chart above shows REVISED claims numbers.)

Extended Benefits (EB) Still Not Available in any State

Extended Benefits have not been available in Alaska (or any other state) since May 11th.