The Republicans LOOK hard-hearted?  They ARE hard-hearted, and they do NOT care about the American people unless they are uber-rich donors. 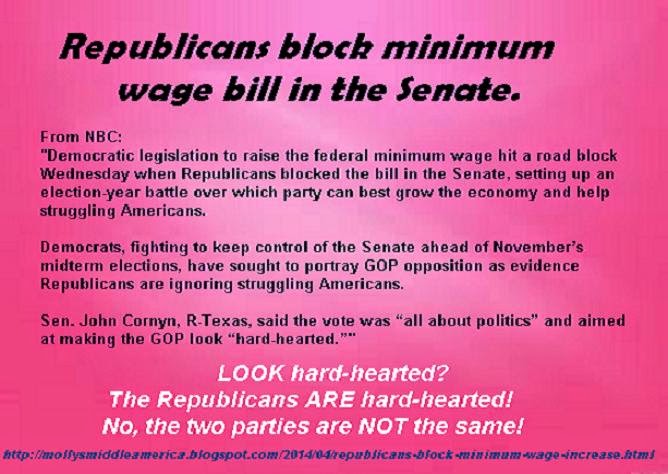 From Andrew Rafferty at NBC:

Democratic legislation to raise the federal minimum wage hit a road block Wednesday when Republicans blocked the bill in the Senate, setting up an election-year battle over which party can best grow the economy and help struggling Americans.

The 54-42 vote was six votes shy of the 60 needed to advance the legislation that would gradually up the minimum wage from $7.25 per hour to $10.10 over the span of 30 months. The bill also included increases based on inflation that, if fully implemented, would allow a family of three to earn an annual income above the poverty line.

Republicans argue the bill will hurt small business owners, which may need to cut jobs to account for the higher wages. They cite a study released by the Congressional Budget Office released in February that found, while helping to alleviate poverty, raising minimum wage would cost the country about 500,000 jobs.
Senator John Cornyn, R-Texas, said the vote was “all about politics” and aimed at making the GOP look “hard-hearted.”

Democrats, fighting to keep control of the Senate ahead of November’s midterm elections, have sought to portray GOP opposition as evidence Republicans are ignoring struggling Americans.

“Their vote today clearly indicates they have problems way bigger than anything they acknowledge in retreats or autopsies,” Sen. Patty Murray, D-Wash., said after the vote. “Their vote today defines their priorities.”

President Barack Obama has made the issue a priority and planned to speak about its importance Wednesday afternoon.

The Republicans have used the Congressional Budget Office's estimate that such an increase in the minimum wage could cost 500,000 jobs.  BUT somewhere between 10 million and 30 million people who now make less than $10 an hour would benefit, AND we are adding jobs at over 180,000 a month.  We'll make up those 500,000 jobs in about three months IF the CRS estimates are at all accurate.  Also, this increase would be phased in over 30 months, so it would not hit with one big bang.
Posted by Middle Molly at 3:44 PM