Weekly Initial Claims Increase; Less Than 30% of the Unemployed Get Benefits

Initial unemployment (jobless) claims increased last week, but stayed below 330,000, as they have for the past month.  326,000 first time claims were filed for the week ending March 29th, a number solidly in the range of first time claims filed back in August and September 2013, before the federal government shutdown in October. 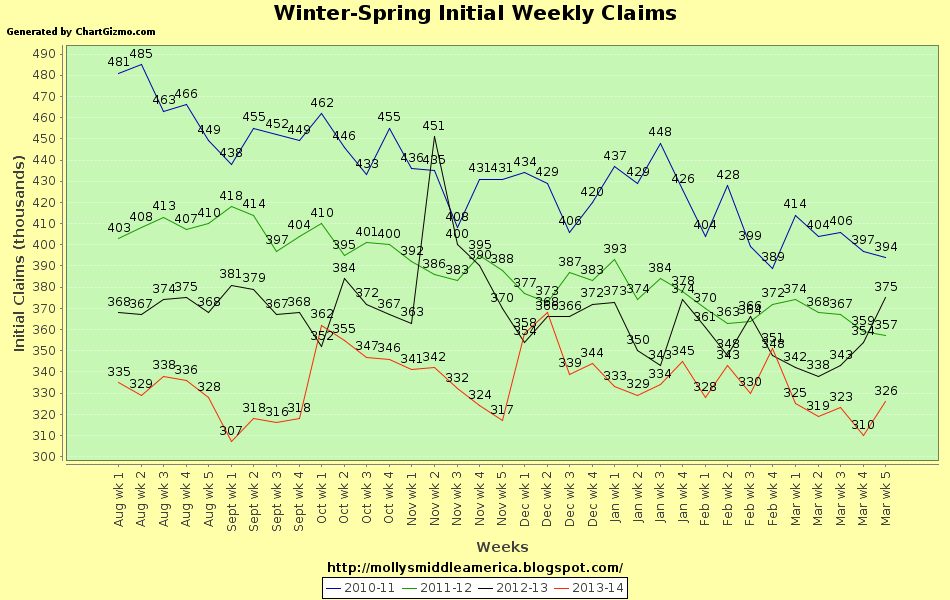 In late summer 2013, layoffs were really down, lower than they had been since early 2007, as can be seen on the graph above.

The government shutdown in October reversed that temporarily, as initial unemployment claims spiked. The numbers started declining as soon as the government was back to work, but the numbers didn't return to those late summer lows for months.

Initial claims spiked the week after Thanksgiving, probably due to seasonal adjustments and the short time between Thanksgiving and Christmas.  The numbers then declined until mid-January, jumped a bit and have declined again started a solid decline.  Weekly March numbers have declined from the averages of January and February.  (We don't know how much of an impact the severe winter, which impacted most of the country, had on initial claims in January and February.)

(Even though the weekly initial claims numbers are seasonally adjusted, these numbers are always a bit volatile and should only be analyzed in terms of a trend over a period of weeks.  See the graph above.)


The four-week moving average # of claims, which smooths some of the week-to-week volatility, increased by 250 last week after decreasing by 10,250 the week before.  It is now 319,500.


Overall, initial claims are now at about the same level they were about seven years ago, in mid 2007. (Unemployment claims started to climb in October through December 2007.)

First time unemployment claims increased by 15,000 over those reported last week.  Last week's initial claims numbers were revised downwards by 1,000 claims.  There are usually slight upwards revisions  (1,000 to 3,000) in the numbers of initial claims in most weeks.  (The chart above shows REVISED claims numbers.)  Also, the Department of Labor revised all of their seasonal adjustment factors, as they do every year in the final week of March; however, these were minor adjustments that had no real effect on the unemployment claims numbers.

As usual, to put all of this into perspective, check out the red line on the chart at the top of the page to see where jobless claims are now, in 2014, compared to the past three years.


The chart at the top of the page is one of the BEST charts for understanding and observing changes in the weekly initial claims numbers over time.  This year (red:  2013-14) and the past three years (blue:  2010-11, green:  2011-12 and black:  2012-13) are marked in different colors.  You can see that, as a trend, first time claims for unemployment have declined from one year to the next, even though there are variations within the year.  The number of initial unemployment claims had been on a downward trajectory in summer, but it increased steeply during October, then declined, then increased in the week after Thanksgiving, but has been generally declining since then.

For the week ending March 15th, 3,201,504 people were receiving unemployment benefits under one of the programs that are available (regular state or a few other smaller programs).  This was a decrease of about 105,000 claims in total since the previous week.  Regular state claims (the first 19 to 26 weeks of claims) decreased by about 100,000 claims; that is, the decline in regular state continuing claims accounted for almost all of the decrease in continuing claims for that week.

As the Federal Extended Benefits program (the "Tiers") have still not been renewed, nobody has received those benefits since the week ending December 28th.  Though the Senate has worked out a deal to extend unemployment benefits, the Republicans in the House of Representatives have indicated that they will not bring that measure to a vote.

Benefits Now vs. a Year Ago?


About 2,078,000 FEWER people are receiving unemployment benefits now vs. one year ago.  Between 1 million and 1.4 million of these people are people who might be eligible for extended benefits if the program were available.  Let's remember that we do not know what has happened to the people who are no longer receiving benefits; we do not know how many of those two million plus people found employment, how many retired, how many have other sources of household income, and how many are still looking for work.  We do know that:

If you are receiving benefits, you may be interested in these reports:

Extended Benefits (EB) Still Not Available in any State; Federal Extended benefits (the Tiers) have not been restored.

Extended Benefits have not been available in any state since May 2013.

Let's remember that, while a decrease in the number of people FILING for initial claims is a good thing and indicates that fewer people are being laid off, a decrease in the TOTAL number of people getting unemployment insurance may only show that fewer people are eligible for unemployment insurance benefits.