Full-Time Job Growth? Who has the better record? Democrats or Republicans? (Updated for May 2017)

Who do YOU trust to grow the number of full-time jobs in this country?

Note:  This was originally published in July 2016; it was updated in November 2016 after Trump won the Electoral College.  This is a final update, released in June 2017 using data from January 2017 with final numbers of full-time workers during the Obama administration.

CNN floated a poll in July 2016 which showed that Trump had an 8% advantage over Clinton when it came to the economy...  Back in July, MORE people... 8% MORE people... actually thought that Trump would be better for the economy!!  What kind of idiocy is that?  (And now, as we move into Month 5 of the Trump Presidency, we will start to see what effect Trump might have on the economy.)  Let's not forget that we were losing 800,000 jobs a month (net) when Obama took over!

Also from the Department of Labor, released June 1, 2017:

But people trust Trump and the Republicans on the economy?

Below is a simple graph:  If you care about full-time job growth, you can easily see which party has the best record (as a percent) of growth in full-time workers over the last 48 years, the period of time for which this data is available online.  (You may have to click on the graph to get a good look at it.)

Look at this chart and then answer that question at the top again:  Who do you trust to grow the number of full-time jobs in this country?  (And notice that the largest increase in the percentage of full-time workers STILL belongs to the much-maligned Jimmy Carter.) 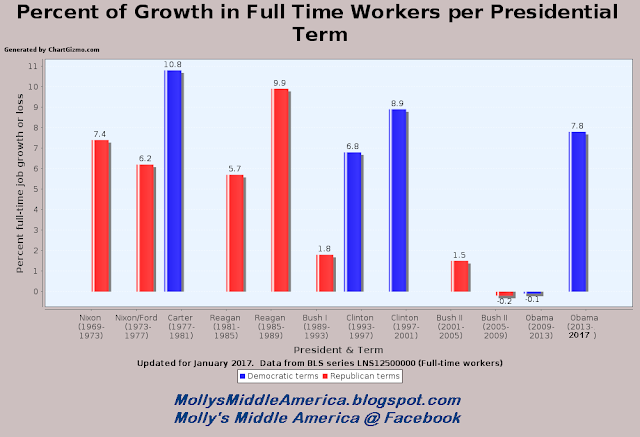 Share widely, especially with your Republican-leaning friends. The propaganda is absurd.  And don't allow any Republicans and Trump fans you come across to talk about "economic stagnation" and "no recovery" during the Obama years.  That's just plain silly.

And if the recovery during the Obama years was not as robust as many would have hoped, blame constant obstruction from a Republican Congress.  We can only imagine how many more jobs we'd have now if the Republicans actually cared about this country and about the people in it vs. just trying to get control back from the Democrats.. which they have now managed to do.

And, President Trump, as the economy moves into the summer and fall of 2017, it will be YOUR baby, and we will be watching you!
Posted by Middle Molly at 7:58 PM