From a Rightie: You're Full of It!

A great lesson on how the right wing lies, obfuscates, and misrepresents:

Google "73% of new jobs are government jobs" and every right-wing blog and website from here to the moon will jump out at you begging you to click on their link.

Except that it is a lie.

I've seen this lie posted on many forums, discussion boards, and rightie blogs over the weekend.  I read through the BLS (Bureau of Labor Statistics) reports and databases pretty carefully as soon as they are released, and I knew this was just plain bullcocky.  It took me a while to find the source, as one rightie was copying this almost verbatim from another rightie.

The righties.. not sure which particular brand of righties..are playing tricks on their followers; and their followers, many of whom would not know a fact if it dropped from the sky and hit them on the head, are buying this foul excrement and spreading it all over the Internet.

Here's the schtick, apparently based on something posted at the right wing rag CNS (Sorry, as of this minute I do not have a direct link; I'll try to find one.):

(CNSNews.com) – Seventy-three percent of the new civilian jobs created in the United States over the last five months are in government, according to official data published by the Bureau of Labor Statistics.

By November, according to data BLS released today, the total number of people employed had climbed to 143,262,000, an overall increase of 847,000 in the six months since June.

This is how the right wingers take numbers out of context without understanding and how they use them to deceive their gullible flock.  It's probably the BEST example I've seen of lying with numbers lately.  Look at the definition of propaganda techniques HERE and read about "Card Stacking".  This is classic.

Here's my explanation of this absurd b.s.:

Whoever came up with this and spread it throughout the right wing blogosphere is using numbers from the Bureau of Labor Statistics reports without knowing their meaning and context.  Or someone wanted to DELIBERATELY fool the right-wingers--- again.

First of all, the specific numbers that are included in that CNS piece are correct... You can find those numbers on various Bureau of Labor Statistics charts.  But those numbers have been taken out of context and are completely meaningless.


The Establishment Survey uses a bigger sample, meaning a higher percentage of its base, and it is therefore more accurate and less volatile than the data that comes from the Household Survey (which is one reason why numbers of people employed, the unemployment rate, and the number of people in the Civilian Labor Force tend to jump up and down quite a bit.)


The propaganda from CNS uses numbers that come from the Household Survey.  They are NOT using the numbers of employees reported on the more accurate and consistent Establishment Survey.


The CNS piece is comparing numbers taken from June and comparing them to numbers taken in November.  Now numbers from both the Household and the Establishment Survey are seasonally adjusted, meaning adjusted for  variations that happen regularly at various times of the year.

However, the reality is that the number of people who say they are working for the government on the Household Survey goes down during the summer (think teachers), even with the seasonal adjustments, which sometimes can be a bit off.  You can see the summer drop  in the graph below.

In "real" unadjusted jobs numbers, the number of employees in the state "Government: State and Local Education" sectors go down about 2,000,000 each summer. 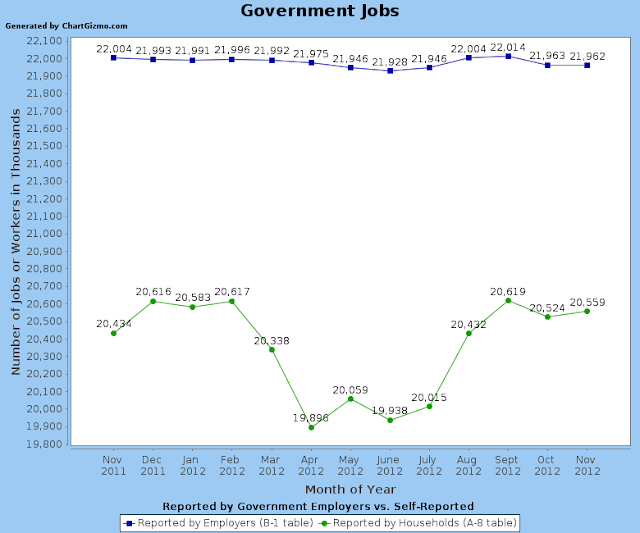 Notice that the various government entities consistently report much higher employment than the people who say they work for the government.  There are a few possible reasons for this:

People who work a temporary or part-time government job, perhaps substitute teaching or working as a teacher's aide, may not report themselves as employed during the summer months, though they may still be listed on their employer's payrolls.  And the seasonal adjustments may just not be that good in the Household Survey.

Here's a good rule of thumb:  Don't use the "A" Household tables to look at government numbers unless you are trying to deceive people.  They aren't reliable nor are they adequately adjusted for seasonal variations.

Another good rule of thumb:  Look at numbers over a similar period of time.  A year is a good period of time.  Three months or six months might do, but you can't just take ONE three month or six month period..  you'd need to look at a few.  Any month when compared to any other random month will give you random results.  Even the monthly October-to-November numbers don't show much.  It takes a few months for any trend to really be significant.

My comment to one of the many who quoted this article with absolute faith that the right wing blogosphere would never think of leading them up Jon Stewart's Bullshit Mountain (Well, Fox's Bullshit Mountain.  Stewart just keeps reminding us of the smell.):

You are being lied to by CNS and other right wing outlets.

Look at the B-1 tables on the BLS databases and you will see that government jobs continue to decline.

CNS is using self-reported numbers from the Household survey, comparing June (when school is out) to November.  You are being used, lied to, and deceived.

You're Full of It.


His answer to that:

Not much to say.  Yep, I certainly am full of facts, sources, and arithmetic.  But some people just have no interest in the truth.  They like their little bubbles of misinformation.
Posted by Middle Molly at 2:49 AM