Unemployment Benefit Extensions Expire: What Does That Mean?

Unemployment in the Spotlight.. Finally!


We haven't heard that much about the unemployed over the past year.  There aren't that many articles about unemployment anymore, the articles that are published about unemployment aren't that well read, and many Americans seem to have forgotten that we still have ten million people who are actively looking for work every month, and that about 6.7 million of those 10 million are people 25 and over looking for full-time work.  (1.9 million are young people, 16 to 24, looking for full-time work, and the rest of the unemployed, about 1.6 million, are looking for part-time work.)

MORE HERE:  How Many Weeks of Unemployment Benefits Will I Get?

But unemployment extensions are now set to expire, and the unemployed are again in the spotlight.  I've been reading many articles about unemployment over the last few days, and the comments to those articles.

So let's attempt to sort the myths and mysteries about unemployment and unemployment extensions in this country.


Myth #1:  The unemployment rate is still going up and things are still horrible.

FALSE.  The unemployment rate actually peaked in late 2009 and has come down ever since.  It is now almost a full point lower (7%) than it was when Obama took office (7.8%).  The number of people who are unemployed now is down by over a million compared to the month that Obama took office, and the number of "prime" unemployed, those 25 and up looking for full-time work, has decreased by two million, despite an increase of over a million in the "civilian labor force". 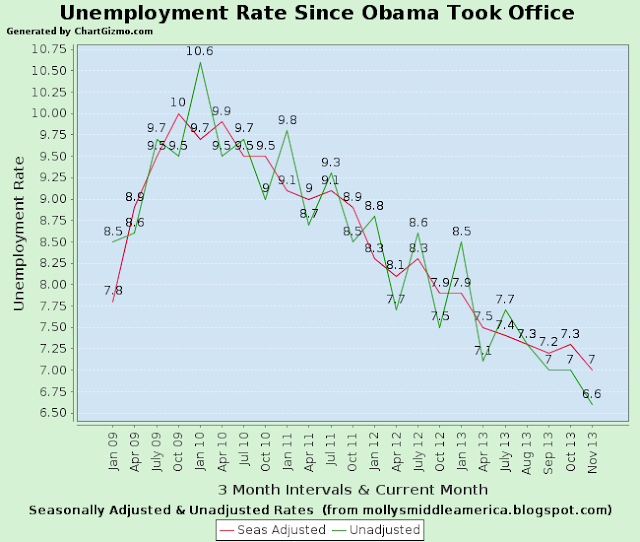 Myth #2:  These extensions just keep going on and on.  99 weeks?  Why should anyone look for work?

FALSE:  Nobody has ever received unemployment benefits for longer than 99 weeks without getting a job, working again (for at least a year) and requalifying for benefits.  The total number of weeks of unemployment has been tied into a state's unemployment rate, and as the unemployment rate has fallen everywhere over the past four years, the weeks of available benefits have also fallen.  Right now, 73 weeks of benefits are only available in two states, and most states only offer 43 to 63 weeks.  Many states offer 42 weeks or less.

And the average benefit is about $300/week, less in some states.  I can't really imagine someone living the life of Riley on $300 bucks a week and being happy about it.

Despite the negativity and protests of Republicans, there is NO incentive, not now, never was, for people to just kick back on unemployment benefits, unless they have another, significant wage earner in the house.  The benefits don't pay the bills; they don't come close.

This is one of the biggest myths out there.  From another article here:

Myth #4:  I was just laid off a few weeks ago, and my benefits are going away!

FALSE:  Basic state benefits are NOT going away; however, those benefits only provide 19 weeks (North Carolina) up to 26 weeks (most other states).  The median length of unemployment is still 17 weeks, which means that a large percentage of the unemployed will NOT be able to find work before their unemployment benefits expire.

Myth #5:  I will get no more money in my account starting today.

NOT QUITE:  This is the last day of the last week for which people can now certify for federal extended benefits (the "Tiers").  Most states require people to certify sometime between the last day of the week and the next 2-3 days of the following week.  Most benefits are received a few days to a week later.

Myth #7:  "There are jobs out there.  Work two jobs at McDonald's before you take unemployment."

NOT QUITE:  Here's the whole spiel from someone posting at NBC:

"I'd would work 2 jobs at McDonald's before going on unemployment. Obviously, these people found it easier and more profitable to get government assistance. There are jobs out there. One just has to go out and get one."

I wonder how much this guy got paid for posting this crap.  Here are the facts:
I'll add to this as I see more myths slung about on various places on the Internet.
Posted by Middle Molly at 12:48 PM