The Chinese are Building an American Bridge! 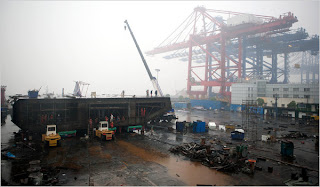 (Photo Ryan Pyle for the New York Times)
Please read the whole article, and I hope you find it as disturbing as I do.

This, to me, was one of the worst parts of the article:

Zhenhua (the Chinese subcontractor) put 3,000 employees to work on the project: steel-cutters, welders, polishers and engineers. The company built the main bridge tower, which was shipped in mid-2009, and a total of 28 bridge decks — the massive triangular steel structures that will serve as the roadway platform.

Pan Zhongwang, a 55-year-old steel polisher, is a typical Zhenhua worker. He arrives at 7 a.m. and leaves at 11 p.m., often working seven days a week. He lives in a company dorm and earns about $12 a day.

“It used to be $9 a day, now it’s $12,” he said Wednesday morning, while polishing one of the decks for the new Bay Bridge. “Everything is getting more expensive. They should raise our pay.”

This was a state of California project, and it was estimated that having the Chinese slave-labor workers manufacture the bridge pieces saved the taxpayers of California 400 million bucks.
But how much did California lose in wages, taxes, and the multiplier effect of having a large project conducted in California?
So why do we have such high unemployment again?
Because the Chinese will work for $12 a day.
And most of us don't think that Americans should work for peanuts.
Some Republicans and Libertarians want to repeal the "government (minimum) wage".
However, I have read much written by Republicans and Libertarians who believe that rescinding the "government wage" would bring unemployment down.  At what cost to our country and to our humanity?
Shame, shame on anyone in California who was a part of awarding this contract to the Chinese.
$12 a day indeed.
Posted by Middle Molly at 7:49 PM