Bursting a Rightie Bubble on the Jobs Report 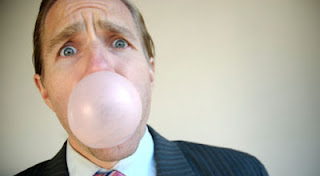 Many people are just thrilled that the jobs report was not (at first glance) great.  They are out there spewing information and misinformation all over the Internet.

In the comments to Paul Krugman's New York Times column on the obstructionist Republicans, I found one such gentleman:

The government report showed the overall labor force dropped by 368,000 workers in August,... the percentage of the population in the labor force fell to 63.5 percent, the lowest level since September 1981. The number of adults not in the work force at all jumped by 581,000 to 88.9 million".

Paraphrasing one great "Keynesian" (as you called him recently) we want to loudly say:

Mr. Obama - tear down that Fortress of Government Beaurocracy (sic) of yours!

PS. Now sit down, relax and let the "best of the humanity" be dumped on us in response to this message...

I replied (but I don't know if this was posted):

I could write more but it is late. So I'll just burst your little rightie bubble on this one issue:

2.  The number of young people age 16-24 who are employed went DOWN about 450,000. They "dropped out of the work force" mostly because they are returning to school. (Though the Republicans would probably rather have young people working in the coal mines for less than minimum wage than staying in school.) The survey is conducted as of the week of August 12th, and as school starts in mid-August, the August survey catches the week when many young people have quit their summer jobs and are getting ready to return to school.

3. About all of those 581,000 more people that are no longer in the labor force? Sorry, but they are kids 16-24 years of age too. Except for about 100,000 MORE people not in the labor force who are over 65.  (You know, old people in this country still get to retire.. well, some of them do.  I'm sure the Republicans will try to take care of that if they get into power.)  There are actually FEWER people age 25-64 "not in the labor force" in August vs. July.


Here's a chart which presents a breakdown of people "not in the labor force" (not in the work force) as of April.  I'll have to update that chart, but that breakdown has changed little in four months.
Come on, righties!  If you are going to post to Krugman at the New York Times, spend a little time looking things up!
Posted by Middle Molly at 6:38 PM