The Truth About That Big Jump in Weekly Unemployment Claims

The Truth About that Big Jump in Weekly Initial Claims for Unemployment Insurance:

The controversy is whether or not the increase in claims for the week ending November 10th is due to the effect of Hurricane Sandy.. or, as some in the right wing blogosphere believe, due to the re-election of President Obama.  More discussion about this below.

The righties are having a field day with the increase in claims.

This thread at the Huffington Post is full of inaccurate statements and even a few racist comments.  So let's look at the facts-- and the rumors-- being touted by our friends on the right.

Is the jump in claims due to Hurricane Sandy?

We won't know for sure until next week when the state numbers for the week ending November 10th are released.. because we don't yet know where the layoffs for the week of November 10th occurred!  State weekly numbers are a week BEHIND the national weekly numbers.  However, it's very likely that most of the huge increase in initial claims is due to Hurricane Sandy.  There were big increases in initial claims in three states for the week ending November 3rd, and those states were three of the many states that were impacted by Sandy:  Ohio, Pennsylvania, and New Jersey.

A few facts and a few falsehoods pertaining to this week's report:


Initial claims have been going down and are still as a whole lower this fall than they were last fall: 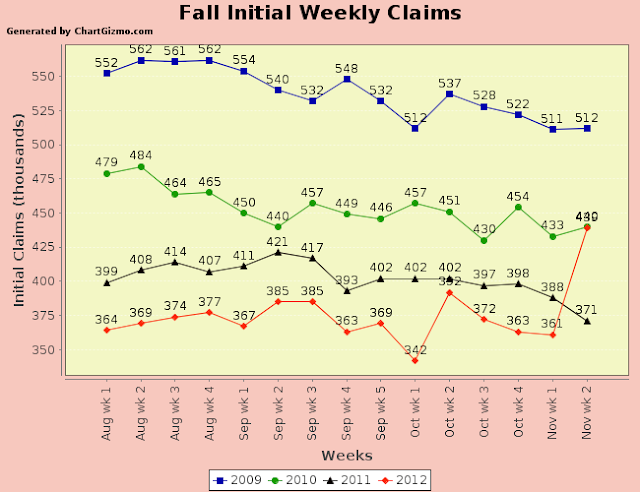 "But claims are up in Pennsylvania and Ohio this week and they weren't impacted by the storm--  Someone is lying!"

Sigh.  If it's not Benghazi, it's something else.

For the record, there was an increase of 100,000 in initial unemployment claims in the week following Katrina.  The number of initial claims was elevated for over 6 weeks in the fall of 2005, but then came back down to its pre-Katrina numbers.  Sandy was a very large storm affecting a very populated area.  We can expect high claims numbers for several more weeks.


"Right before the election there was a big decrease in initial claims.  Now it has gone up, so something is fishy."

"Obama has been reelected; and we are now plunging into recession.  You'll be sorry!"

Oh, please... You lost.  Go away.  The market has been down since Obama was re-elected due to "fiscal cliff" issues regarding tax cuts and automatic spending cuts that will kick in on January 1st if nothing is done about them.  That creates uncertainty and markets do not like uncertainty.

And, as I have said and as every pundit out there has said, this week's huge jump in initial claims for unemployment benefits is most likely due to Hurricane Sandy.  We will see which states contributed to the increase NEXT week.  We don't have that state information THIS week.
Posted by Middle Molly at 11:33 AM