Weekly Initial Unemployment Claims Up and Down

Weekly unemployment initial claims increased by 18,000 this week to 354,000 after decreasing the last two weeks.  Weekly claims seem unable to break below a mid 300,000 range of claims, as is obvious from the chart below.


Weekly claims numbers tend to be volatile and weekly seasonal adjustment factors can also throw the numbers off, so any one week change is not meaningful until we see if it becomes a pattern (or does not become a pattern) over a series of weeks.  (For instance, the chart below shows that a significant increase in initial claims at the end of March did not continue.)

First time unemployment jobless claims increased to 354,000  for the week ending June 15th.   This is a modest increase of 18,000 claims.  Since the beginning of the year, new weekly claims have remained in the 325,000 to 365,000 range for nineteen out of the past twenty weeks.

The four-week moving average # of claims, which smooths some of the week-to-week volatility, increased by 2,500 last week after decreasing by 6,750 the week before.  It is now 348,250.  Initial claims continue now at about the same level that they were five years ago, in late 2007 to early 2008.

For the week ending June 1st, 4,533,560 people were receiving unemployment benefits under one of the programs that are available (regular state, federal extended unemployment compensation, or a few other smaller programs).  This was a increase of about 18,000  overall claims since the previous week.  Most of the increase was in the number of continuing claims in the Regular State program (the first 20 to 26 weeks of unemployment benefits), which increased by 35,000.  Continuing claims in the Federal Extended Unemployment Benefits program (the "Tiers") decreased  by about  19,000 claims.

About 1,285,000 FEWER people are receiving unemployment benefits now vs. one year ago.  We do not know what has happened to the people who are no longer receiving benefits; we do not know how many of those 1,285,702 people found employment, how many retired, and how many are still looking for work.  We do know that there are 1,596,000 more people reporting themselves as employed than a year ago and there are  2,115,000 more non-farm jobs.  We also know that a grand total of 52,084,000 hires have been made by employers between April 2012 and April 2013, the latest month for which numbers are available.  (Some people may have been hired more than once during the year, so the number of "hires" is generally higher than the number of people who have been hired.)

The percent of unemployed people receiving benefits increased to about 40.1% for the week ending June 1st. 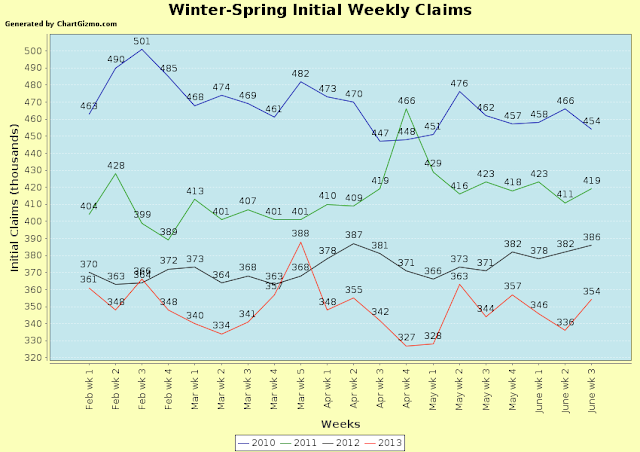 First time unemployment claims increased by 20,000 over those reported last week.  Last week's initial claims numbers were revised upwards by 2,000.  There are usually slight upwards revisions  (1,000 to 3,000) in the numbers of initial claims in most weeks.  (The chart above shows REVISED claims numbers.)

Total number of people receiving unemployment insurance is 40.1% of the officially unemployed for the week ending June 1st.