Just after Friday's disappointing jobs report for March 2015, we get the always-delayed JOLTS (Job Opening, Layoffs, and Turnover Survey) for February 2015.  The quick summary:  There was a big increase in the number of job openings and a big decrease in layoffs.


And, if we look closely, we might see some of the reason for the disappointing jobs numbers for March:  A record-breaking surge in job openings in February, a continued upswing in the number of people who quit, and a record-breaking low number and rate of layoffs in February. Perhaps employers cannot find people, at least in certain areas and in certain fields, to fill their jobs openings.

The number of job openings is very high; the number of hires is still high compared to last year but slightly down from the past few months; the number of additional jobs and workers was modest in March.  And companies are simply not laying off many people compared to previous years.

Is this a sign that employers are not able to find people to fill open positions?

This may mean that employers cannot find enough qualified applicants to fill those openings.  (It may mean that employers are going to have to start training the employees they need which would be a good thing.)  It may also mean that companies decided not to fill those February job openings in March for a variety of reasons.  We won't know what is true for a few more months.  (One month does not a trend make; never has, never will.)

So let's look at a telling graph:

At the end of 2014, we had 1.8 jobseekers per job opening in this country.  In February, that ratio has decreased slightly to 1.7 jobseekers per job opening.  Though this is the best ratio we've had since 2007, we still have many more people per job opening compared to late 2000, the end of the Clinton years.  This is one of the reasons that things still feel difficult for so many people:  We never reached the halcyon days of the 1990's during the mid-2000's recovery before the economy crashed, and we still have a long way to go before we get back to the job availablility of the Clinton years. 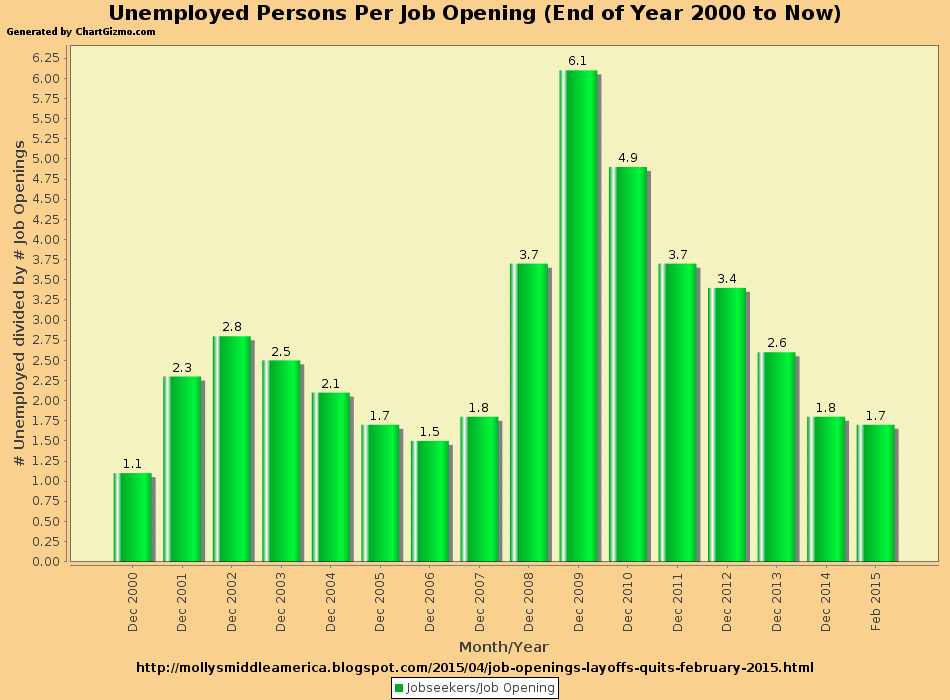 T
Millions and millions of jobs:

Here's the breakdown for February:

Note that the number of hires minus separations is very close to the increase in the number of jobs for February 2015 according to the latest revisions.

Other takes on today's JOLTS reports:


Reuters agrees with me:  US Job Opening Data Points to Skills Mismatch  OK, employers!  Set up those training programs!  Now!