The pundits redeemed themselves this month. 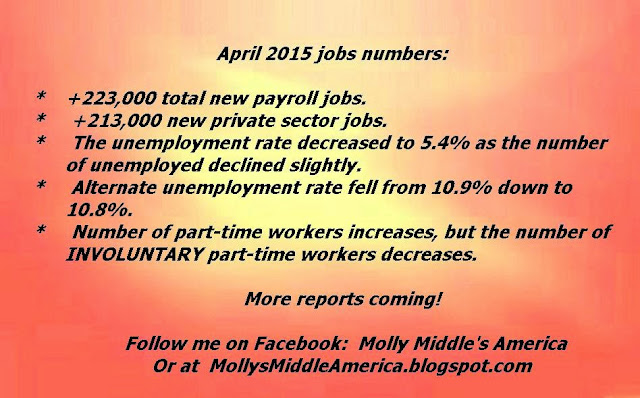 The "pundits" are also saying that the rebounding jobs numbers show that employers are confident enough, even after a bit of stagnation earlier in the year, to keep hiring.

I felt that March's poor showing, in view of rock bottom initial unemployment claims and high numbers of job openings in early 2015, might have been attributable to employers actually having a harder time filling positions in February and into March:  It was colder and people may have stayed out of the winter job market a bit longer than usual. Remember that job numbers are reported as of the second week of the month, and it takes several weeks to get new hires on board.

It's possible that I was actually right about this, as unemployment claims continue to be very low and we did see an uptick in labor participation this month.  As usual, one month up or down does NOT make a trend, and we will all have to wait and see.

Let's remember that we are STILL not where we want to be in terms of jobs.  We still have about 1.7 active jobseekers for every job opening out there compared to 1.1 active jobseekers per job opening in December 2000.  This is one of the reasons that so many people still feel they are hurting in this economy.  The labor market just did not do that well in the early 2000's and we're still trying to make up for that.

Since the "trough" of the recession in late 2009/early 2010 in seasonally adjusted numbers:
Since Bush left office & Obama took office (January 2009) in seasonally adjusted numbers:
April 2015 reports: (Notation on the links will be changed to "UPDATED for APRIL" when the updated reports become available.)
The good, the bad, the ugly-- This was my preview of Friday's jobs numbers written Thursday before the numbers were released:


"The pundits" expect about 224,000 more jobs when the BLS counts are released tomorrow (Friday) morning at 8:30 a.m., with the unemployment rate falling by a tenth of a percent to 5.4%.  If there are many more jobs but the unemployment rate stays the same or goes up a tenth, this would be a good indication that more people have entered the labor force in April.  The outlook for jobs continues to be bullish, but the two consumer confidence calculators come up with completely different outlooks.  Other than that, unemployment claims, both new claims and continuing claims, are VERY VERY low, lower than they have been for 15 years.