No! There are NOT 93 million people "long term unemployed!"

There is a right-wing talking point out there, a talking point unfortunately picked up by some liberals and progressives, that there are "93 million people out there who are either 'not working' or 'unemployed' ".

I've talked about this many times.  I've included pie charts; I've quoted the Bureau of Labor Statistics (the BLS) and I've tried to explain the difference between "unemployed", "not working", and "not in the labor force". Unfortunately, it seems as though there are people who simply can't understand these distinctions.  My pie chart below is based primarily on two Bureau of Labor Statistics charts.  The first is the breakdown of people not in the labor force HERE; the second is the breakdown of young people 16-24 by employment and education status HERE. 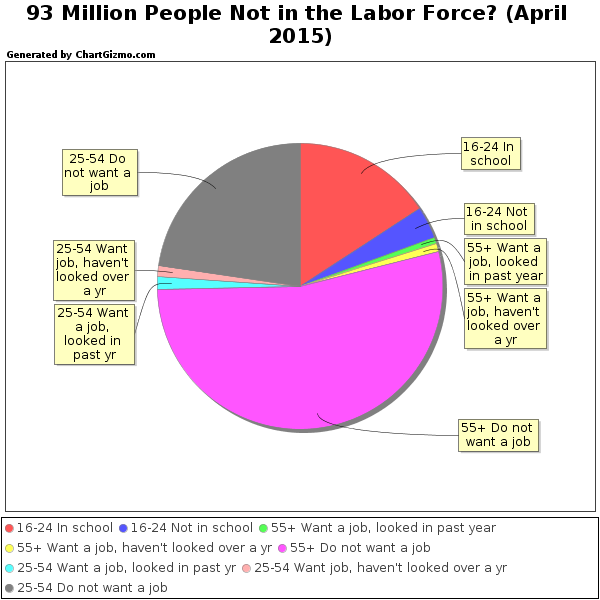 
I last wrote an article about this issue HERE back in January 2015.  I explained, perhaps in way too much detail, who those 93 million are and why they are NOT the same as people who are the "long-term unemployed" or "not working".

My current concerns apply to a person who commented on the post I mentioned above, the post from January 2015.  The person brought up many more points than just the business about the "93 million people unemployed or not working", but I'm only addressing that comment because that's the one I know the best.

I will say that if all of the assertions of the person commenting are correct (which they are NOT), we should all be supporting REPUBLICANS because it would be clear that Democratic economic policies haven't done a darned thing.  I don't understand how people who believe as this commenter does can consider themselves liberals or progressives.

I have explained and explained who those 93 million people are and why they "aren't working".  I don't know what more I can say, but I will summarize:

How are the people "not in the labor force" living and paying their bills?

Based on the demographics of the people "not in the labor force", we know that most of them are retired.  They are surviving on pensions, assets, Social Security benefits, perhaps part-time jobs, and some of them probably still have a working spouse.

The next largest piece of the pie are students; if they are in high school or college, they are probably being supported by their parents.

People from 24 to 54 who are not working are probably mostly people home with children.  They are probably being supported by the working spouse.

But aren't there people who are homeless or who have no means of support?