May Jobs:  At first glance, NOTHING NEGATIVE.

The pundits were a bit short on new jobs when they contemplated May. 280,000 new jobs were added in May, many more than the 226,000 anticipated. The unemployment rate crept up to 5.5% as about 400,000 people entered the labor force. At first glance, there is NOTHING NEGATIVE in this jobs report. Very bullish, very positive numbers. 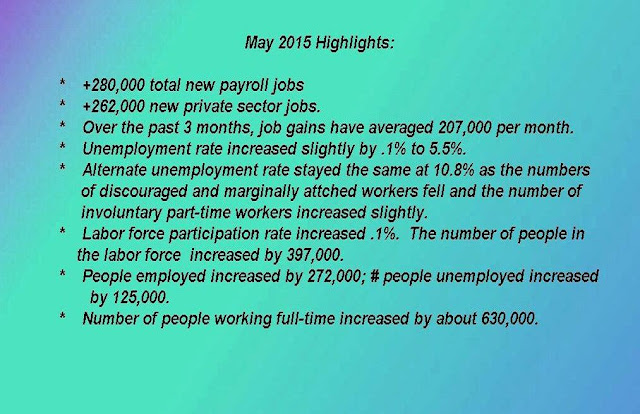 If there are many more jobs, as there were in May 2015, but the unemployment rate stays the same or goes up a tenth, as it did in May 2015, this would be a good indication that more people have entered the labor force in May.  This was certainly true in May, as 397,000 people ENTERED the civilian labor force, the largest increase in five months.

There was much concern back in March when the number of jobs added was very low.  I suggested that the less-than-expected increase in the number of jobs may have reflected companies having a harder time filling positions in February and into March:  It was colder and people may have stayed out of the winter job market a bit longer than usual.  I suggested that we would see a rebound in the next months, and the low numbers in March were not a reason to be concerned.  I remain convinced that I was right.

May 2015 reports: (Notation on the links will be changed to "UPDATED for MAY" when the updated reports become available.)


May 2015 Jobs Numbers Preview as of Thursday night, June 4:

If there are many more jobs but the unemployment rate stays the same or goes up a tenth, this would be a good indication that more people have entered the labor force in May.  The outlook for jobs continues to be bullish, but the two consumer confidence calculators come up with different outlooks.

Other than that, unemployment claims, both new claims and continuing claims, continue to be VERY VERY low, lower than they have been for 15 years.