How Many Jobs Has Trump Created or Lost? (February 2017 update)

February is the FIRST month of jobs attributed to Trump's Presidency.  Job numbers for any month are reported and counted as of the week of 12th.  Obama was still the President during the week of January 12th, which is why numbers for January 2017 fall in the Obama bucket.  Now, starting with February 2017, we get to see what effect Trump's policies will or won't have on jobs.

(Some people believe that additions or subtractions in jobs should be in the prior President's "bucket" for at least several months after a new President is inaugurated.  The reasoning for this is twofold:

Let's remember that jobs tend to trend, and one or two months do not make a trend.  (Some people believe that we shouldn't count an incoming President's jobs numbers until the beginning of his first fiscal year in office, meaning starting in October, as the federal fiscal year goes from October 1st to September 30th.)  But starting with February will certainly give us a good enough trend as we move through the spring and summer.

As we move into the Trump years, let's remember that President Obama

handed to President Trump the strongest economy in terms of jobs since the Clinton years.  We have: * 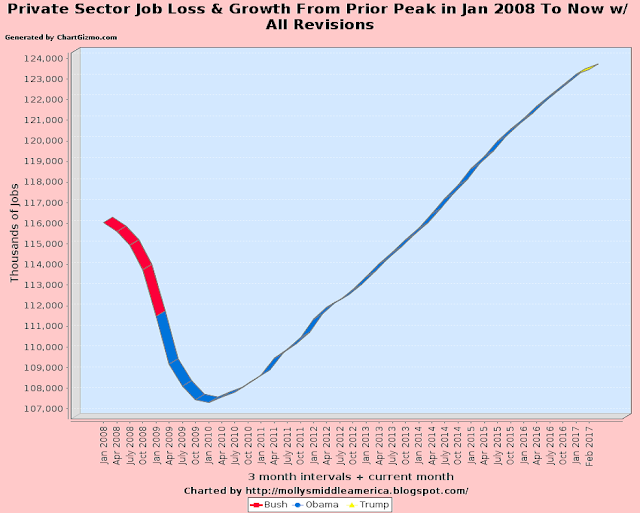 How many workers were full-time or part-time when Trump was inaugurated compared to now?

Have any private jobs been lost (net) over the past 1 months since January 2017?

Have any jobs been lost (net) over the past 1 month since January 2017?

NO!
Are more people unemployed now than when Trump took office in January 2017?

All February 2017 highlights and reports will be listed HERE.

The above jobs numbers are from the BLS jobs report of February 2017, which was released in early March 2017.  The surveys used to gather these numbers are taken as of the week which includes the 12th day of the month, in this case, February 12, 2017.