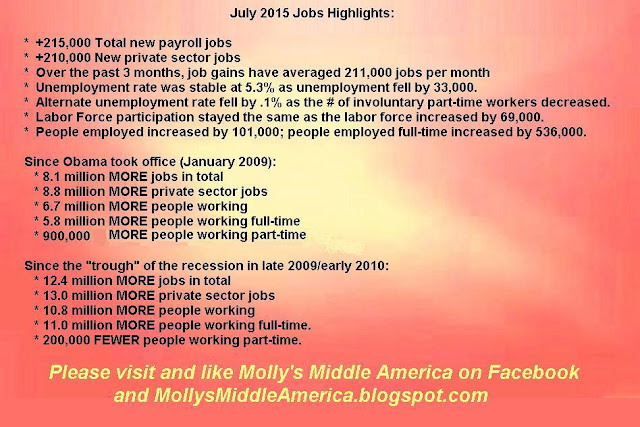 July 2015 reports: (As usual, notation on the links will be changed to "UPDATED for JULY" when the updated reports become available.  Not all reports are updated every month.)

This will be a short preview as I did spend quite a bit of time watching the Republican debates this evening.   The pundits and prognosticators are predicting decent, but not blockbuster, jobs numbers for July when the BLS releases that report tomorrow morning, Friday, August 7, at 8:30 a.m. Eastern time.

See you all in the morning!

1.  Reuters:  Reuters conducts a survey of economists and reports the consensus:.

The number of U.S. jobs probably rose at a healthy pace in July and wages likely rebounded in data due on Friday, providing further signs of an improving economy that could allow the Federal Reserve to raise interest rates in September.


A Reuters survey of economists forecast U.S. nonfarm payrolls increased by 223,000 last month, matching June's job gains, a number which would be slightly above the monthly average for the first half of the year.


Though the pace of hiring has slowed from last year, it remains double the rate needed to keep up with population growth. The Labor Department will release its closely watched employment report on Friday at 8:30 a.m.

The unemployment rate is forecast to hold steady at a seven-year low of 5.3 percent, near the 5.0 percent to 5.2 percent range most Fed officials think is consistent with a steady but low level of inflation.

2. ADP: The private payroller ADP's report, which usually precedes the BLS report by two days, was disappointing.  ADP estimated that only 185,000 more private-sector jobs were created in July 2015.  ADP estimated increases in all sectors, with the fattest increase in professional and business services.

3.  The June Consumer Sentiment index compiled by the University of Michigan  showed a decline from 96.1 in June to 93.1 in July.  However, the Sentiment Index has increased 14% over the past year.

Consumer confidence slipped a bit in the July 2015 survey. A disappointing pace of economic growth was the main reason for the small decline in consumer confidence. Nonetheless, the data provide no indication of a break in the prevailing positive trend. Indeed, the Sentiment Index has averaged 94.5 since December 2014, the highest eight month average since 2004. Although one-in-ten consumers, when asked to identify any recent economic developments they had heard, referred negatively to Greece, the Chinese economy, and the Trans-Pacific Partnership on trade, it had virtually no impact on the Sentiment Index. The maintenance of confidence at high levels during the past eight months has been mainly due to modestly positive news on jobs and wages.

4.  The jobs report by the search engine Linkup.com was higher than the other projections.  A lot of information in that report; if you are a numbers geek, you may find a side trip over to the Link up blog very interesting indeed:

Based on the 11% and 17% increases in job openings on LinkUp in May and June respectively, we are forecasting a strong jobs report for Friday with a net gain of 310,000 jobs.