The jobs numbers for August 2012 compared to previous Augusts are actually pretty good!


August typically is not a good month for job growth, so it's informative to compare this August to prior Augusts. 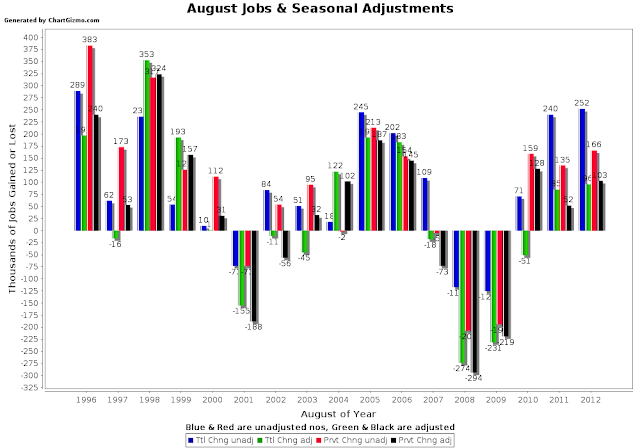 Though I understand why we seasonally adjust jobs numbers, I don't completely understand the precise formulas that are used.  Therefore, I don't understand exactly why the seasonal adjustments this year were not as  good, relative to prior years, as they should have been considering the unadjusted numbers of jobs.

The chart above shows a fairly high blue bar marked "252" for the year 2012.  It is higher than any other blue bar going back to 1996.  Those are total unadjusted "real" jobs.  The red bar for the year 2012 doesn't stick out quite as much, but it is higher than all other red bars save one, going back to 1998.  Those red bars represent unadjusted "real" private sector jobs.  The green and black bars represent seasonally adjusted jobs.

In any event, August 2011 (last year) was the "zero" month.  In early September, it appeared that we had not added ANY new jobs.  But now, with adjustments and corrections, it appears that we actually added 85,000 in August 2011.  At the end of this month, the CES numbers will be benchmarked to the County Employment Reports which are based on the unemployment tax records that employers must send to the feds.  These are generally more accurate than the CES sample survey, and, in a growing economy, they often result in more job growth than was originally projected.  So--- we will have to see what happens next week.