How Many Jobs Were Created or Lost Under Obama with the New Benchmarks?

This is a subset and a copy of our latest "How Many Jobs Created or Lost under Obama" column as adjusted based on the new benchmarks which were released today, September 27, 2012.

No other reports have been adjusted at this time.

How many jobs created or lost under Obama?
How many private sector jobs have been lost or added during Obama's presidency?


Since the beginning of Obama's first Fiscal Year (October 2009):


Have any private jobs been lost (net) over the past 30 months?
NO!


(Explanations and detail below.  Keep reading.) 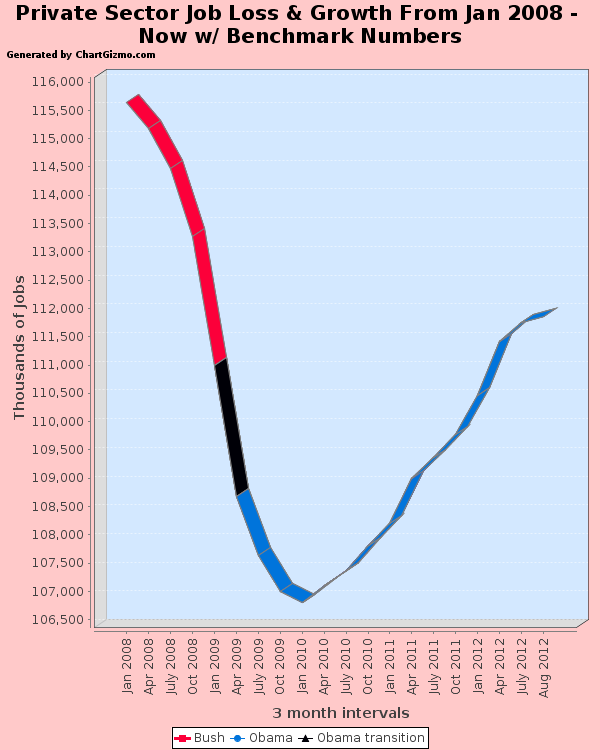 
How many jobs have been lost or gained during the Obama administration?  Have more new jobs been created or have more jobs been lost under Obama to date?

We are in positive territory when we look at total jobs numbers, private jobs numbers, and people working compared to the "trough" of the jobs recession in late 2009/early 2010.

We are also in positive territory when we look at total jobs numbers, private jobs numbers, and people working compared to the start of Obama's first Fiscal Year in office which started October 1, 2009.


What Was the Unemployment Rate When Obama Took Office Compared to Now? (August 2012)

(Note:  All of my employment number reports are based on monthly reports and data published by the Bureau of Labor Statistics.  Monthly numbers reports are based on the monthly Employment Situation Report.  The Employment Situation report includes month over month and year over year numbers of jobs and workers.  My analysis is taken from the monthly BLS data copied to an Excel spreadsheet every month.  I calculate detailed percentage increases/decreases, 3 month numbers, 2011 to date numbers, and I compare jobs numbers to those at the time of Obama's inauguration and at the "trough" of the recession.  As the BLS revises its numbers as new information is available, I use the latest available numbers in my monthly articles, which means that those numbers may differ slightly from numbers published in previous months.)