The fact that more and more people need food stamps is gong to "Ruin Your Day".


The title is "Here's a Food Stamp Graph That Will Ruin Your Day". 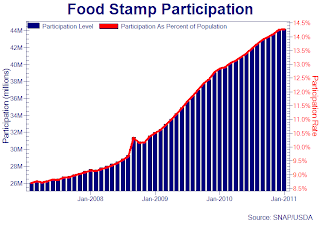 It shows that the percentage of people who are receiving food stamps has gone up precipitously over the past three years.


Now, the scary title was found on a right-wing blog, and what will "ruin your day" is the number of people who are now dependent on the government.


Before I read the article and the comments, I had two thoughts:  First, it's really unfortunate that so many people need to rely on food stamps, and, secondly, thank heavens that the program is in place to help so many.


Then I looked at the graph, and noticed that it was formatted for maximum impact.  The left axis isn't scaled from 0 people needing food stamps; it starts at 26 million.  Instead of the left axis running from 0 to 45 million, it runs from 26 to 45 million.  It makes the increase in food stamps recipients seem much more onerous.


I had just found the food stamp article and graph after reading this at Huffington Post:  Budget Cuts Kill  the Middle Class


The Increasing Inequality of Income in our Country


The article at the Huffington Post included this dramatic graph which shows the percentage of total income that is going to the top ten percent over the last 100 years:

You don't need to be particularly skilled in graph reading to notice that the middle class was strongest when the top ten percent received only about 35% of national total income.  This last chart only goes up to about 2007, so it doesn't show the impact of the recession.


First of all, the USDA has made it easier for people to get food stamps.  Thirty-eight states loosened eligibility requirements.  You no longer have to be down to your last dollar to qualify for food stamps.  This should be a good thing, as you can supplement your low income with food stamps without spending down all of your assets.  This also explains some of the increase.


Now, conservatives see the increased need for food stamps as a bad thing because it shows "government dependency".  They don't interpret it as a graphic representation of the nation's suffering; they complain about people becoming dependent on the government.


Let's look at some comments:


"Fox Piven must look at graphs like this one and jump for joy. Just look at how many Americans are now dependent on the government for"

"Democrats see this as a plus, more and more people on the dole means more votes and MORE POWER."

Other than I have no idea who or what Fox Piven is, why would anyone jump for joy that more and more people have a low enough income to qualify for food stamps?  Do the right-wingers really think that people enjoy being "dependent on government"?  Democrats are happy that people are struggling?  Only in bizarro-conservative right-wing world. I tend to think that most people would rather have a decent-paying job.


We need to place limits on these programs. We can’t support participants forever. Break the cycle.

What cycle?  People are getting food stamps who have never gotten food stamps before.  Obviously, then, this is not about a cycle.  Of course, the writer of this remark thinks that if we let people starve, they will suddenly find work in a nation with 28,000,000 unemployed or underemployed. Or maybe the poor will demand that the "government wage" (right wing rhetoric for minimum wage laws) be reduced so that they can all work for $1/hour.


The 14% graph is his base for 2012 and the house should introduce a bill to exempt people on government assistance from voting. Call it the Conflict of Interest Act. It will get some headlines and put the issue front and center where we can make the case of Obama spending policy and jobless economy

Great. Let's go back to the days of poll taxes and such and only let people with means vote. Really sick thinking going on here. Also really dangerous thinking; that only people with decent jobs should be able to vote.

By this "Conflict of Interest" act, then nobody in Congress should vote either, right?
Then a poster called the Democrats the "Party of food stamps" and talked about Republican policies that create jobs.  O.K., what policies, Republicans?
Finally:

Its all Bush’s fault

This was posted sarcastically, but it is probably truer than blaming this on Obama.  The decimation of the middle class has been going on for decades now; the recession just made it more obvious to a greater number of people.
Posted by Middle Molly at 9:53 AM