Dogs Against Romney Is on the MSN Front Page! 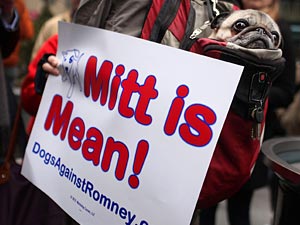 Our friends at Dogs Against Romney  are the subject of a front page article at MSN this afternoon.

Mitt Romney's treatment of his Irish Setter Seamus many years back has been getting more and more press lately.  (Romney put the family pet, Seamus, in a kennel strapped to the top of his car for a 12 hour car ride.  The story is HERE.)
Dogs Against Romney organized a protest at the Westminster Kennel Club Dog Show a few days back, and they continue to build up more and more friends and likes at Facebook.  (Yes, Mitt is mean!)
But making the front page of MSN is, to me at least, quite a big deal.
As I wrote last month (and so, so many people agree with me):  You can tell so much about a person by how they treat their dogs!

And don't miss the Mutt Romney Blues!  Poor ol' Seamus singing the blues to his "Boss" Mitt with the help of the great American guitarist and folksinger, Ry Cooder.   Brave New Films put this together on behalf of poor old Seamus.
Those Romney Tax Returns!!
Since I wrote my article (just after I heard about the Dogs Against Romney group), Romney published his long-awaited tax returns.  He made 21 million dollars while he was "unemployed".  That number is just staggering.  20 million would provide SNAP program (food stamp) assistance for about 4,000 families of four for a year---and Romney would still have one million a year to live on.  But I know, I know:  Romney earned his money (though he was unemployed).  Those people who need food stamps just didn't "plan well", "make good choices", or "work hard".  Grrrr.......
What Became of Seamus?
I've also heard more rumors about Seamus.  I reiterate that these are only rumors; Mitt and his wife might be the only people who know the truth.  It appears that Seamus didn't return home from that long car ride.  Supposedly he lived out his days on a Canadian farm..  But some believe Seamus ran away.  And others believe.. well, parents for generations have told their kids that they gave the dog to a farm when they could no longer keep an animal for some reason.  But Seamus' ultimate fate remains a mystery.
What's New at the Dogs Against Romney Shop?
Meanwhile, Dogs Against Romney keeps adding things to their shop.  See what's new!  Woof woof!!  Wag wag...!! 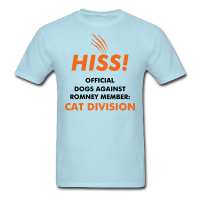