Reagan and Obama: No, Things Were Not the Same!

"Reagan inherited an economy with similar problems to that inherited by Obama.  But by the third year, things were really simmering along and the GDP was growing at a very quick pace!

Reagan's economic policies and tax cuts were therefore better than those of Obama."

I've heard and read this in many places this winter.

The Truth About Reagan and Carter and the 1981 recession 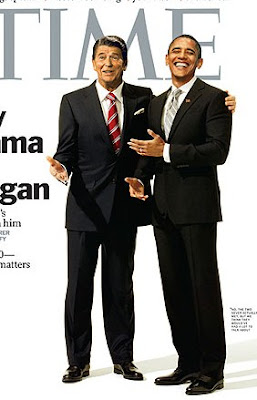 I read the following yesterday posted as a comment at the Huffington Post.  Let's debunk this fact by fact:

1.  "Ronald Reagan "inherited­" a very similar (to the current) economic downturn from Jimmy Carter in 1981."

2.  "Three years into Reagan's presidency his economic policies created over 6.3 MILLION jobs, reduced unemployment from double digits to 7%....Reagan created over 6 million jobs at the same point in his presidency as Obama is now."

4.  (Reagan did this)  WITHOUT spending TRILLIONS in taxpayer money.

5.  Reagan CUT taxes and the booming economy and the millions more people in the workforce with jobs actually INCREASED federal income tax revenue!!"


I think we need a few facts here:


Remember: Reagan was working with a DEMOCRATIC House in Congress. They could have played obstructio­nist games as the Reagan administration was on the ropes in late 1982, but it appears that they cared more about the American people than about getting the Republican out of the White House.  However, the current obstructio­nist Republican Congress will do anything, including prolonging the misery of the American people, to get Obama out of office.    (Click on that link if you haven't heard about the Inauguration 2008 night meeting of Republicans who were busy plotting to keep you in misery.. just to recapture the White House.)

I will repeat one thing: It was Reagan's tax CUTS in 1981 that plunged the country into that deep Reagan recession. It was the tax INCREASES in late 1982 that got the economy moving again.

The GDP did take a nasty dip during the spring of 1980.  It popped back up pretty quickly, and the GDP was chugging along at an increase of 7+% when Carter was elected.  It hummed along at an increase of 8+% in early 1981 during and after Reagan's inauguration.  Most of the problems in the economy could be related to the 1979 oil crisis, resulting from both the Iranian revolution and the start of the Iran/Iraq war.

Reagan inherited an economy that had a quick brief downturn, turned around, and was starting to cook.   Period.

Then in Spring 1981, the GDP again went negative, with a small recovery in the summer.  Reagan's major tax cut, the Economic Recovery Tax Act of 1981, was signed in mid August 1981.  Starting in the 4th quarter, October 1981, things really fell apart, with a 5% decline in GDP in that quarter and a decline of over 6% in the GDP in the first quarter of 1982.  Things were very dicey throughout 1982 and the unemployment rate kept climbing from 7.5% when Reagan was inaugurated up to 10.8% in late 1982.

Congress apparently worked on a tax INCREASE all year, and finally a tax increase package, the Tax Equity and Fiscal Responsibility Act, was signed into law in November 1982.  And a couple of months later, the 10.8% unemployment rate started to decline and the GDP started to grow again..vehemently.  By the end of Reagan's third year in office, in late 1983, the unemployment rate was 8.3% and the GDP started growing again.. with a vengeance.

Some charts and information for comparison:

GDP growth by quarter from Economagic.com :

Here's what was happening at the time Obama was elected:

No, Reagan and Obama did NOT inherit similar economies.


HERE is a list of Reagan tax measures, both increases and decreases.
From ThinkProgress:  Ten Things Conservatives Don't Want You To Know About Reagan

Another good link comparing the two Presidents and the situations they "inherited":  Why the Obama Recovery is Much More Impressive Then the Reagan Recovery