Weekly initial first-time unemployment claims were down 2,000 this week.

But according to the "pundits", this wasn't enough of a drop and the sky is falling.. or at least, starting to fall.  From MSN:

Bloomberg apparently also had a negative spin on the numbers.:


More Americans than forecast filed applications for unemployment benefits last week, a sign the improvement in labor-market conditions may be stalling.

As I mentioned last week, seasonal adjustments are a bit tricky in early April and may make the initial claims numbers seem as though they are going up when they are in fact going down... or they are at least even.
We know that, over the past two years, the unemployment rate has come down and the number of jobs along with the number of people who are employed has come up.  Layoffs are decreasing and, overall, first time unemployment claims are decreasing.
Here's a chart showing comparisons among this year and two previous years in first-time unemployment claims in March and April: 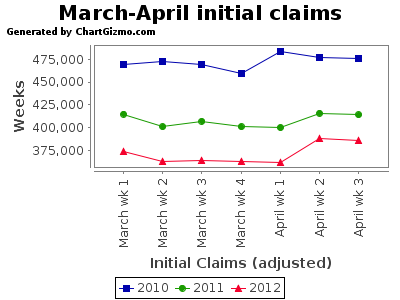 Notice that there is a bump in the first or second week of April in all three years, and then it subsides.  Also notice how much lower the first time claims are in 2012 (red) vs. 2011 (green) vs. 2010 (blue).
But the naysayers are, as usual, just thrilled to announce something fairly neutral as negative.  Just remember, weekly claims are volatile and need to be taken with a grain of salt.
Posted by Middle Molly at 9:15 AM