The biggest conundrum in unemployment these days is the juxtaposition of these two sets of facts:
Many people who notice that fewer people are "officially" unemployed claim that people are dropping out of the labor force (meaning that they are no longer actively looking for work and therefore not counted among the officially unemployed) because, while they still "want a job", they are terribly discouraged about finding work and they are no longer even looking for work.  (To be counted as officially unemployed, you need to be actively looking for work within the past four weeks.)
But the numbers simply don't support this!  ALL numbers of unemployment and underemployment, including numbers of people who are "discouraged" and who "want a job" but aren't actively looking, are decreasing, as seen on this chart: 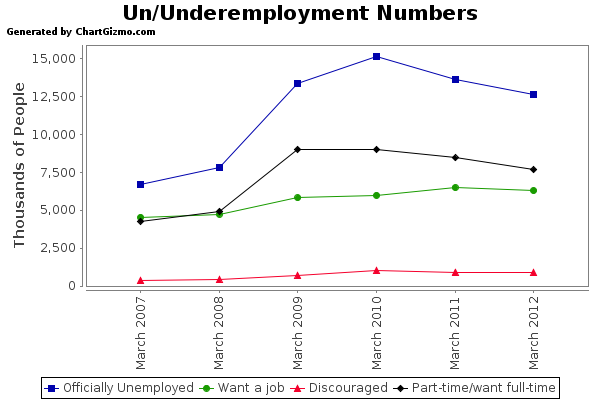 How Many with no Resources?
We really don't know how many people are out there with no resources, particularly compared to other years, such as 2005 or 2007.  As you can see from the chart, at the peak of the last economic cycle when jobs were still plentiful, in 2006 or 2007, we still had millions of people who were among the  unemployed; we still had hundreds of thousands of discouraged workers; we still had millions of people not in the labor force who "want a job".
One thing that we can tell when we put all of these numbers together is that we don't really have a good idea as to what happens to people who exhaust their unemployment benefits.  One year ago there were 8,300,000 people collecting unemployment benefits (down from a peak of about 12,000,000 two years earlier), and now (March) there are about 6,800,000 people collecting benefits.  1,500,000 fewer people are collecting benefits.  We don't know how many of these people went back to work.  We know that, as we mentioned above, there is a DECREASE in the number of discouraged workers since last year (from 921,000 down to 865,000), and there is also a DECREASE in the number of people who "want a job" compared to last year (6,500,000 down to 6,299,000).  So people who are no longer collecting benefits aren't all looking for work, don't all want a job, and aren't filling the ranks of the "discouraged" workers.


What has happened to the unemployed and the discouraged?
Facebook groups and websites for the unemployed still attract many people who are miserable.. .and scared.  But other websites for the unemployed, particularly those aimed at 99ers (people who have exhausted all of their unemployment benefits) seem to have much less activity than they did a year or two ago, and it is unclear if that is meaningful or not.
So.. if the numbers of people who want a job, the numbers who are unemployed (whether short-term or long-term), the number of "discouraged" workers, the numbers of people working part-time who want full-time work have all decreased..  where did those people go?  The "buckets" that have increased are:  1.  The number of employed (including the number employed full-time) and 2.  The number of people who are not in the labor force and DO NOT WANT A JOB.


More people who DO NOT want a job...

More people who ARE working....

We now have 2,270,000 MORE people who are employed than we did a year ago.  (That's an increase of about 1.7%.)  There are studies that seem to show that, while we have more people back at work, many of these people are working at jobs that are below their skill level and many are working temporary, though full-time jobs.  But, nonetheless, they are working vs. dropping out of the labor market.

If you still have assets, you have a choice.

Which makes sense.  If you are in desperate need of money and you no longer have unemployment benefits, how do you survive?  You don't have a choice; if you can find a lousy job, you take it.  But if you no longer have a job and you no longer have unemployment benefits but you DO have assets, you DO have a choice:  Wouldn't you stop looking for work, drop out of the labor force, and scale back your retirement plans rather than take a lousy job, particularly if you are only a few years away from Social Security?  You might not be able to get hired for those lousy jobs anyway.

Look for more information and a breakdown on the people "not in the labor force" later this week.

All information and numbers used come from the Bureau of Labor Statistics databases and tables and/or monthly employment situation reports.  Details provided upon request.