More About Those Jobs Numbers...

They are still complaining about "cooking the books" in terms of jobs numbers.


The monthly Bureau of Labor Statistics jobs numbers and unemployment report was released a WEEK ago, but we still have miscellaneous pundits out there seeming to imply that someone somehow was "cooking the books" or otherwise miscounting jobs.

If you have just come across this post and this blog, you may need a little background.  I would suggest that you start with my posts on "873,000 More People Employed" and "Is the BLS Cooking the Books?"  Hopefully those two posts will explain the controversy.

July and August:  Number of jobs up but number of people working down.

September:  Number of people working up (a lot), but number of jobs not up as much.

To add some light to the subject, I plotted three absolute measures (not increases or decreases) of numbers of private employees (seasonally adjusted) since January 2011:


Here's the graph (though some of the specific numbers are hard to read): 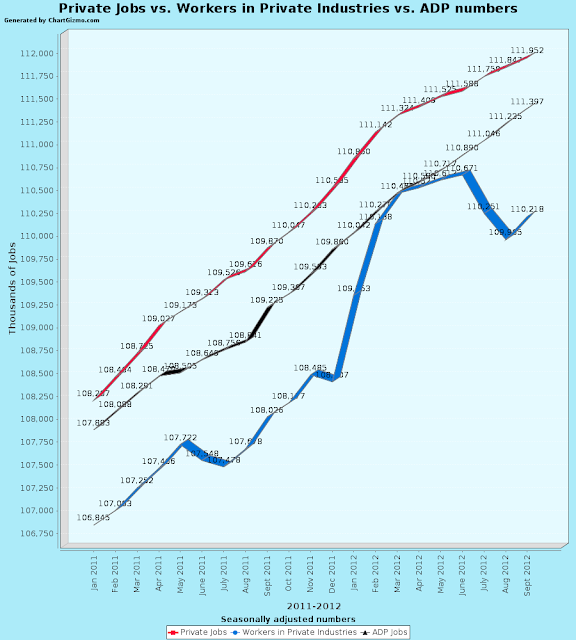 A few things to note:
Conclusions?
Posted by Middle Molly at 11:58 PM