Fox lies again:  People and Jobs Are Leaving in Droves!  (Or not..) 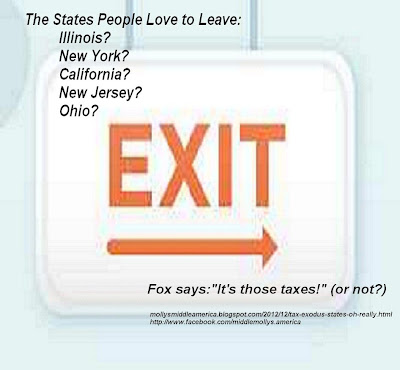 Fox News is making much noise about a Fiscal Times article that has highlighted five states that Fiscal Times claims people are leaving due to high taxes.  I guess people who lean right are so used to being lied to by various right-wing news outlets that they don't even question the data they read.  (Oh, life is so rosy in the red fog of the right!)  This particular story about people leaving these states in droves has no obvious sources.  Other than a reference to buy a survey on each of these states for $29.99.


Here are the five horrid states:

You can read Fiscal Times' detail HERE, but the five states that people are supposedly leaving in droves are these:

1.  Illinois, the home of Chicago, the home of Barack Obama, the state and the city that conservatives love to hate- and love to hold up as a bad example of... everything.  Illinois increased its state income tax temporarily from 3% to 5% two years ago.

2.  New York (actually tied with California according to the Fiscal Times).  I guess some rich guy feels that taxes are too high in New York, so he is taking off for Florida, wrote a letter to the New York Post, and that is all that anybody who reads the Fiscal Times needs to know.

3. California, another state that conservatives love to push around and discuss what a "shambles" it is.

4.  New Jersey, which has redeemed itself a bit since it elected a Republican governor.

5.  Ohio, as in "Let's kick the old Rust Belt state around again".  The author states:  "The interesting part about Ohio though, is that a constant stream has always existed out of the state. "  Does the author mean "exited"?  Any editors spell-checking over there?

Rankings of These States in Terms of Job Growth

Shouldn't the number of jobs be declining compared to states full of milk, honey, low taxes, and Republicans?

Now, the article is about people actually packing up and leaving the state because, according to the author,  they can pay less taxes elsewhere.  But still, if these states were so horrible, one would think that, particularly in light of the recession, the numbers of jobs and numbers of people employed would be rapidly decreasing, especially compared to states full of milk, honey, low taxes, and Republicans.  These rankings compare all 50 states based on percentage increase or decrease in jobs.  "1" is the best; "50" is the worst.

1.  Illinois:  If taxes are so miserable in the Land of Lincoln (and Obama), we would expect that Illinois would be among the worst states in job growth over the past two years, wouldn't we?  My heavens, those dastardly Democrats raised the state income tax 67%!  Well, Illinois isn't leading the pack, but it's not in the dregs either.
Not great, but not awful, and a lot better than its neighbor to the north, the home of "Let's give everything we've got to the corporations so that they will give us jobs" Governor Scott Walker of Wisconsin.  Since Walker got into office, Wisconsin ranks dead last in job growth.  Now Walker kept telling us that all of those Illinois companies were going to relocate north of the border to escape those horrible Illinois taxes, but that hasn't happened yet.  We're waiting:  Any day now, Scottie?

And when you look at raw numbers, it is even worse:  Wisconsin has actually LOST about 20,000 jobs since Scott Koch Brothers Walker took office.  Illinois, even with that "atrocious" tax rate and those horrible Democrats all over the darned place, has ADDED 69,000 jobs in the same amount of time.

2.  New York:  I can't help think of New York without envisioning Eva Gabor from Green Acres excitedly talking about "New York is where I'd rather be" while she throws clothes around after a shopping spree.

(Now remember that these numbers are for October, before Hurricane Sandy destroyed many beachfront communities as well as damaging a big part of lower Manhattan.  We can expect jobs numbers to go down over the next two months as state jobs numbers reflect the damage and as New York recovers.)

But how is that horrible, overtaxing, Democrats-running-amok New York doing in terms of jobs?  New York's rankings compared to all 50 states:
Hmmm... respectable numbers.  But, no, it just can't be.  For, as the article states:

Tom Golisano, the founder of Paychex (NASDAQ:PAYX), wrote a letter that was published in the New York Post about why he was leaving the state. And he didn’t mince words, explaining he was taxed out of the state for greener pastures to no-income-tax Florida. And it shouldn’t be a shock, Florida welcomed him with open arms.

Now, come on, New Yorkers, if this guy is moving to greener pastures a la Green Acres, why are the rest of you staying put?  Pack your bags and rush to Florida, where summer heat, Medicare fraud, Rush Limbaugh, and long voting lines await you-- with open arms, especially if you have a lot of bucks.

3.  California, the much-abused state that conservatives love to hold up as good example of a lousy state, and of course, another state with Democrats running amok; those nasty Communist Dems even have a super-majority now.  Can socialized medicine and gulags be far behind?

According to the people at the Fiscal Times, people are just jumping over that border heading for that relative tax haven Nevada.  So California's job ratings?
And how is that tax haven neighbor Nevada which supposedly is taking in thousands of California refugees?

Of course, Nevada is a much smaller state than California, but still.  California has added 410,000 jobs since December 2010 and Nevada has added 20,000.  But just don't stand too close to that Nevada/California border; you don't want to get stampeded by those Californians jumping that border into low-tax Nevada.

4.  New Jersey.  Another long-time blue state, even though Chris Christie, the Obama-hugging governor, is a  Republican.  "Including local taxes, New Jersey has the highest tax rate in the country."  So, of course, we're going to have to see a decrease in the number of jobs up there, right?  Anyone with any sense is making a dash for the cash in some other state.

And New Jersey's jobs numbers aren't wonderful compared to other states, but they aren't really miserable either; pretty much on the order of the jobs numbers in Illinois (Again,these numbers precede Hurricane Sandy):

5.  Ohio.  People have been kicking Ohio around for decades now.  It was a Rust Belt state which people were leaving when we Baby Boomers were kids.
Yep.  Stunningly, that Rust Belt state is actually doing pretty darned well in job growth.  Oh, that's right!  Now that state DID elect a Republican governor and they now have Republicans running amok all over the state.  That must be it!  It couldn't have anything to do with the auto rescue, because all of the Fox-listening Tea Party people KNOW that government stimulus doesn't work (unless it's stimulus of defense contractors).  And the auto industry deserved to go bust because they still use demanding, unionized workers and conservatives all know that unionized workers are lazy and insist on livable wages and health insurance, which is a bad thing.  (Hopefully by now, you've figured out the sarcasm?)

So.. Where's the data as to people leaving these various states?


I just looked at the BLS civilian non-institutional numbers of people 16+ for these various states (which comes from the Census), and those numbers have been going up consistently for the five states listed above. Even Ohio has gained in population consistently since 1976.

Let's make it clear that people come and go all of the time.

Some people are leaving all of the states and others enter all of the states, but there is no obvious evidence from raw Census numbers that people are leaving the states mentioned in droves, and there is plenty of evidence that, despite some people heading for the hills, the states mentioned in this article continue to increase in population.
And, more to the point, the states pilloried by the Fiscal Times and Fox News aren't doing that badly in jobs.  Tomorrow I'll also post my article ranking all of the 50 states in terms of percent of jobs over the past two years.

Fun and Games at the Fiscal Times?

Note:  My numbers are taken from the numbers of jobs for the 50 states according to the Regional State Employment and Unemployment report as reported in Table 5 Total and the individual databases for jobs, numbered  SMS01000000000000001 through SMS54000000000000001.  Data is copied to a spreadsheet on my computer for purposes of calculating percentages and rankings.