No other way to describe the number of first time unemployment claims over the past few weeks.


First time unemployment jobless claims decreased significantly to 344,000  for the week ending February 23rd.   This is a decrease of 22,000.  The four-week moving average # of claims decreased by 6,750.  First time claims are now at about the same level that they were in late 2007 to early 2008.

For the week ending February 9th, 5,764,168 people were receiving unemployment benefits under one of the programs that are available (regular state, federal extended unemployment compensation, or a few other smaller programs).  This was an increase of about 183,000 continuing claims since the previous week.  The increase in continuing claims was almost exclusively in claims in the Federal Extended Unemployment Benefits program, as the increase in regular state claims was a very small 1,600.

Percent of Unemployed People Receiving Benefits increased to about 43.7%. 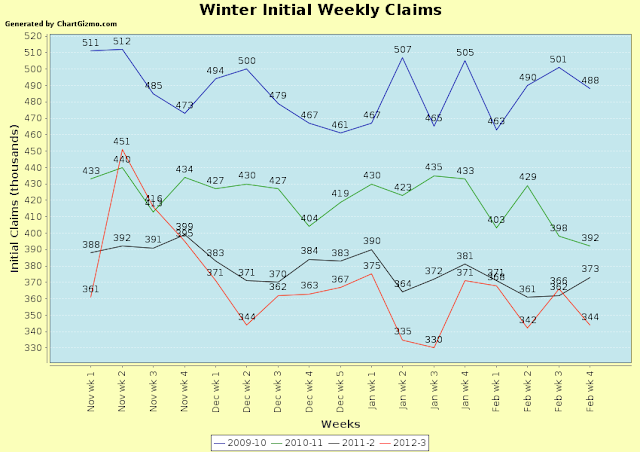 The chart above is one of the BEST charts for understanding and observing changes in the weekly initial claims numbers over time.  This year (red:  2012-13) and the past three years (blue:  2009-10, green:  2010-11 and black:  2011-12) are marked in different colors.  You can see that, as a trend, first time claims for unemployment have declined from one year to the next, even though there are variations within the year.  You can also see the impact of Hurricane Sandy on claims in November 2012.
Though the number of initial unemployment claims has been very jumpy over the past three months, it has continued a downward trajectory.

First time unemployment claims decreased by 22,000 over those reported last week.  Last week's initial claims numbers were revised upwards by  4,000.  There have usually been slight upwards revisions  (1,000 to 3,000) in the numbers of initial claims in most of the weeks of the past four months.  (The chart above shows REVISED claims numbers.)

The initial claims as announced last week were 362,000, so the claims from that week were revised upwards by 4,000.

Current December/January Initial Claims Continue to be the Lowest Since Late 2007/Early 2008.

Total number of people receiving unemployment insurance is 43.7% of the officially unemployed for the week ending February 9th.

The weekly report also tells us the total number of people who are receiving unemployment benefits.  For the week ending February 9th, 5,764,168 people were receiving unemployment benefits under one of the programs that are available (regular state, extended benefits, federal extended unemployment compensation, or a few other smaller programs).  This compares with 13,181,000 people who are unemployed in unadjusted numbers according to the monthly January unemployment situation report which was released four weeks ago.  (The February numbers will not be available until the end of next week, on March 8th.)  Those numbers, showing that only 43.7% of the officially unemployed are receiving benefits, should make it clear that people do NOT need to be receiving unemployment insurance to be counted among the unemployed.  (This ratio and these two numbers are NOT seasonally adjusted.)

Extended Benefits claims were only available in Alaska during the week ending February 9th.

Therefore, over the last ten months, 99.8% of the people who were receiving Extended Benefits are no longer receiving such benefits.  We do not know how many of these 349,000 people found jobs, how many have another source of income in the family, and how many have nothing.