March 2013 reports will be released Friday, April 5th.  Check back then!

Weekly unemployment initial claims popped back up this week after a downward trajectory for the past month.  Unemployment claims have increased two out of the last five weeks.


First time unemployment jobless claims increased to 357,000  for the week ending March 23rd.   This is an increase of 16,000 but it the first time in a month in which weekly first time initial claims popped above 350,000.  It is unclear whether or not this is a trend, as the Department of Labor also readjusted seasonal adjustments with this week's report.  Weekly claims numbers to date showed that employers were NOT laying people off in response to the sequester.  It's really too soon to tell if this week's claims numbers have any meaning other than the usual weekly volatility.

The four-week moving average # of claims increased by 2,250 after decreasing by 6,250 last week.  First time claims continue at about the same level that they were in late 2007 to early 2008.

For the week ending March 9th, 5,455,757 people were receiving unemployment benefits under one of the programs that are available (regular state, federal extended unemployment compensation, or a few other smaller programs).  This was an increase of 86,750 continuing claims since the previous week.  The increase in continuing claims occurred in the Federal Extended Unemployment Benefits program (the "Tiers") whereas claims in the Regular State program (the first 20 to 26 weeks of unemployment benefits) decreased 40,000.

Percent of Unemployed People Receiving Benefits decreased to about 43.6% for the week ending March 9th. 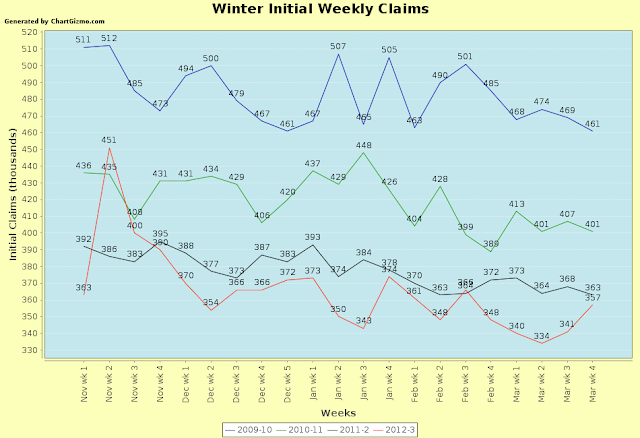 First time unemployment claims increased by 16,000 over those reported last week.  Last week's initial claims numbers were revised upwards by  5,000. in seasonally adjusted numbers, but they were only revised upwards by about 1,800 in unadjusted numbers.  There are usually slight upwards revisions  (1,000 to 3,000) in the numbers of initial claims in most of the weeks of the past several months.  Numbers reported this week also reflected changes in seasonal adjustments.  (The chart above shows REVISED claims numbers.)

The initial claims as announced last week were 336,000, so the claims from that week were revised upwards by 5,000.
Posted by Middle Molly at 9:25 AM