Was the December jobs report horrible?

Even though the unemployment rate fell by three-tenths of a point, a significant change, the pundits on both the left and the right are decrying the lack of job growth.

Is it as bad as all that?

Well, we've heard it all before.

The jobs numbers in any one month need to be taken in context.

Am I the only one, for instance, who remembers the big ZERO month of August 2011?  The President and the Democrats got so, so much flack for that lousy jobs performance, even though it occurred in the wake of the government debt ceiling debacle.  But those numbers were revised upwards as more accurate data became available, and it now appears that we added 130,000 jobs in August 2011, not ZERO.

So this month's numbers may be increased.. or they may not be.  But one bad month does not a trend make.

Average job growth over the past Fifteen Years

Let's look at the average number of private sector jobs added (or lost) each year over the past 15 years: 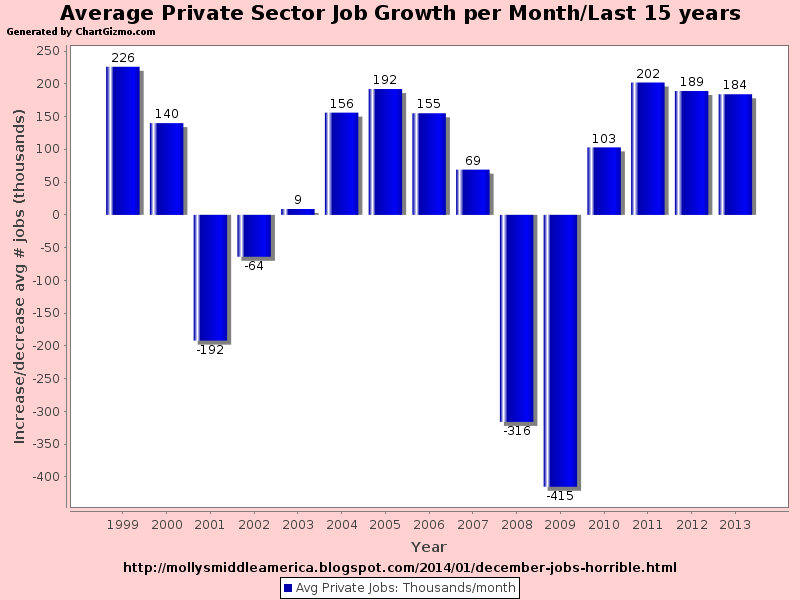 Second thing that should be obvious:  Private sector job growth in the past 3 years, including 2013, has been better than any other period of job growth going back to the late 1990's.

Now, we lost a huge number of jobs in 2008 and 2009, so job growth following such a decline should be much stronger to make up for the loss of jobs.  But that's simply not going to happen without more stimulus.  And this chart shows PRIVATE sector job growth, not total job growth including government jobs.  The decline of government jobs has definitely hurt our overall recovery.  I'll publish a chart of average government job growth/loss tomorrow, and the real problem will become apparent:  We need the government sectors to help with our job recovery. And that simply is not happening.
Posted by Middle Molly at 12:22 AM