The crazies and the know-nothings love yesterday's jobs report.

The December jobs report released Friday, January 10, was not that great; it showed an increase of only 74,000 jobs, only 86,000 private sector jobs.  The unemployment rate did drop to 6.7%, but the crazies are writing that off mostly to a drop in the level of people in the "labor force participation", meaning the number of people in this country who are 16 or over and are either working or actively looking for work.

Sigh.  Now it is not time to cut off extended unemployment benefits.. We haven't made it out of the economic woods yet.  But there is no evidence that the sky is falling, that Obama's stimulus didn't work, that we should open the floodgates to unfettered capitalism (which got us into this mess).

So, a day after the report was released, it is time to look at jobs numbers myths and mysteries.. again.  There is not much to say here that I haven't said over and over and over again.  The anti-Obama/Doomsday preppers/crazies/whatevers desperately WANT to believe that the sh*t is going to hit the fan, and they are thrilled whenever any kind of bad report supports their insanity.

The December 2013 jobs myths and mysteries:

1.  Myth:   The "worst jobs report in three years":  Well, not really.  The August 2011 jobs report, two years and a few months ago, showed a ZERO gain in jobs.  ZERO.  The pundits and other hangers-on went completely nuts over that one.

Now remember that the jobs numbers in any given month are preliminary and are usually revised.  The August 2011 jobs number was revised.. first from ZERO to 57,000 jobs.  Then to 104,000.  Now, two plus years later, the BLS believes that 130,000 jobs were added in August 2011-- based on more accurate and more complete data.

Does this mean that last month's 74,000 will be revised upwards?  No guarantee.  But it means that we need to be cautious about claiming that the sky is falling.  And the same people who are most vocal in the sky-is-falling department will be the last people to declaim their dire predictions when the dire predictions simply.. dissipate into the ether.. or are negated by positive reports some months down the line.

Why the plunge vs. expected?  Weather?  Perhaps.  It is absolutely silly to see any one month as a harbinger of anything.  The weather for the week ending December 15th, the survey week, did absolutely suck around here; it sucked much worse than most second weeks of December.  It is likely that many employers did not call in people to work due to the miserable weather.

The seasonal adjustment may have been out of whack for some reason.  In 2003, for instance, 117,000 private jobs were lost in real numbers from November to December.  Seasonal adjustments recorded a jump of 108,000 private sector jobs that month.  So in 2013, we had a drop of 120,000 private sector jobs from November to December, resulting in a seasonally adjusted jump of only 87,000.  (Private jobs usually drop in "real" numbers between November and December.)

Bottom line:  It is just a waste of time to obsess over the jobs report for any one month.  An absolute waste of time.

2.  More about seasonal adjustments:  The Borg collective known as Tyler Durden over at  Zero Hedge couldn't figure this one out:

"And the funniest part when one considers the surge in construction workers in the ADP report:
Construction employment edged down in December (-16,000).  However, in 2013, the industry added an average of 10,000 jobs per month. Employment in nonresidential specialty trade contractors declined by 13,000 in December, possibly reflecting unusually cold weather in parts of the country.
So construction workers both surged and plunged due to the weather.

Duh.  First of all, the Durden WAS talking about the BLS report, but then it suddenly starts talking about the ADP report.  The ADP report simply doesn't give us enough data; it doesn't break things down enough to provide a decent ability to look at such things as seasonal adjustments and at sub-sectors.

When I look at the BLS construction sector, I notice that "real" construction jobs dropped 216,000.  This was adjusted to a drop of 16,000, as construction jobs ALWAYS drop in December.  How many "real" jobs did ADP estimate in coming up with its increase of 48,000 construction jobs?  I'm looking at the ADP site, but so far, cannot find that number.  The biggest tumble in the BLS report was in civic construction, a drop of 77,700, while specialty trade contractors dropped 124,000.  Unless ADP provides a similar breakdown, it is silly to try to compare the ADP numbers and the BLS numbers.  Unless you are looking at UNadjusted numbers, it is absurd to try to make comparisons.. and it could be that seasonal adjustments are the cause for the "surge" in construction workers in the ADP report vs. the decline in the BLS report.  Not enough info to tell.

3.  Myth:  The really bad thing is the SURGE in the number of "working age" people not in the work force.

Duh again.  How many times do I have to write the same thing?  The "civilian non-institutional population 16+" upon which the labor participation numbers are based INCLUDES 85 year old grandmas as long as they live at home, 16 year old high school students, people who are disabled and living at home, people who are working part-time by choice, people who are home with their kids, people in college who are not working (because they don't want to), and people who are just plain retired.  Now I don't think of an 85 year old grandma as "working age".. do you?  And I really don't consider a 16 year old who works a few hours a week to buy apps for his/her iPhone "working age".. do you?  Maybe in the days of child labor, no Social Security, and abject poverty among seniors, these people would have been considered "working age", but thank heavens that we have evolved as a society past that point--- I hope. 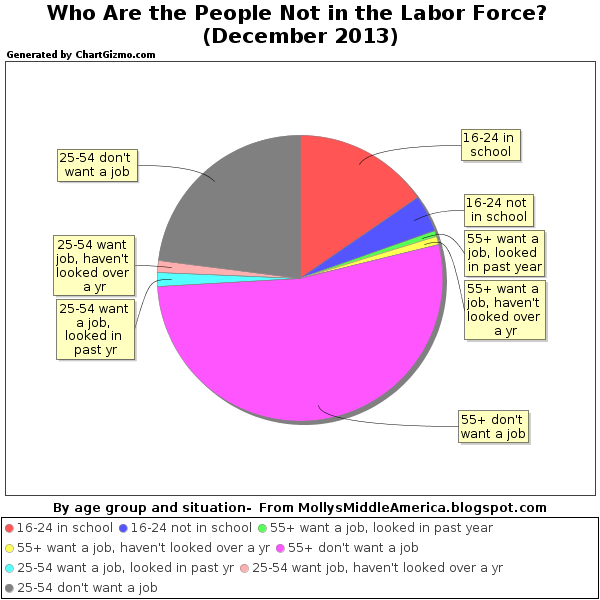 Will the sky never fall?

Will we have decent jobs reports month after month into perpetuity?  Well, I firmly believe that one of thse days, millions of years from now, the Earth will fall into the Sun and that will be the end of it all.  And before that happens, things are going to get pretty dicey on this particular globe.  So ultimately the Preppers will be right.  But all of the prepping in the world isn't going to help when that stuff really hits the proverbial blast from the sun.
Posted by Middle Molly at 11:07 AM