The March 2016 Jobs numbers and unemployment reports were released by the Bureau of Labor Statistics on April 1st, 2016.  The April numbers will be released Friday morning, May 6th. 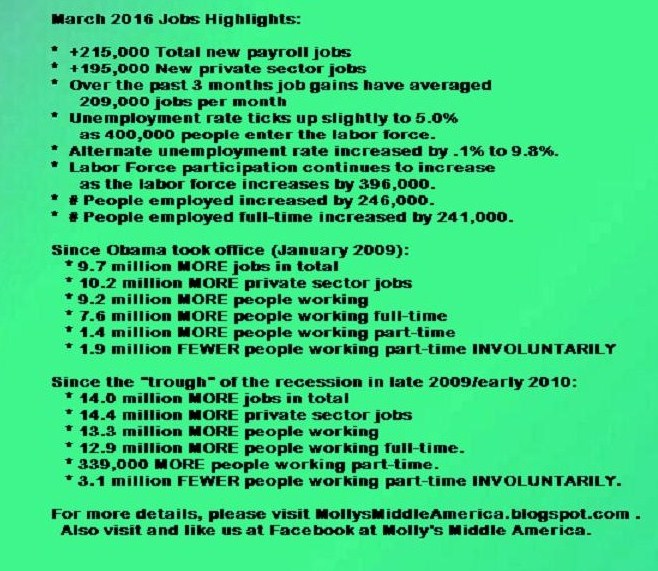 The pundits were expecting continued good job growth, in the vicinity of 200,000 new jobs.  The ADP report, which was released Wednesday, March 30th, showed an increase of 200,000 private sector jobs.  In the ADP report, Mark Zandi made the following comments:

Mark Zandi, chief economist of Moody’s Analytics, said, “The job market continues on its amazing streak. The March job gain of 200,000 is consistent with average monthly job growth of the past more than four years. The only industry reducing payrolls is energy as has been the case for over a year. All indications are that the job machine will remain in high gear.

March 2016 reports: (As usual, notation on the links will be changed to "UPDATED for March" when the updated reports become available later today or over the weekend.  Not all reports are updated every month.)

More highlights and reports will continue to be posted here throughout the day and over the weekend.  Please check back!
Posted by Middle Molly at 12:37 AM