"Steel wire meshes have been fitted to windows at Foxconn's factory to stop workers jumping after a rash of suicides believed to be due to harsh management practices." 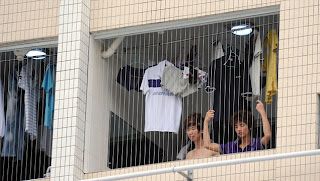 Just look at the picture... then look down at your iPhone or your iPod.  Unless you are completely heartless, you will never be able to see your iProduct in the same way again.

This article came out last June but I don't remember reading it back then.

Come on, people, why aren't we in the streets hundreds and thousands strong protesting this and other issues pertaining to working conditions around the world?  These people in China can't do much about the conditions in which they work!


Also from the article:

After details of the Chinese suicides leaked out, and Jobs promised he was 'all over it', his Chinese partner announced that his workers would receive a generous-sounding 30 per cent pay rise, raising the basic wage from £90 to £120 a month.

Yet human rights groups denounced this as a public relations sham, saying that the legal minimum wage was being raised by the Chinese authorities in any case.

Lu Bing Dong, 22, helps produce 21,000 iPhones daily in his workshop alone. 'The pay rise is actually stopping us making more money because now they are strictly controlling overtime,' he says.

'Foxconn are very smart - they say it's a pay rise, but we actually earn less. It's meaningless. They will increase the daily quotas [of products made] to make up for lost time.'

As we left the sprawling Foxconn complex, workers were putting cages on one dormitory block with balconies - yet another measure to keep workers from killing themselves.

Minyanville's Justin Rohrlich reported on Foxconn and its iPod makers.

There appear to be many reasons for the rash of suicides, but you can't miss the nets that Foxconn installed to catch jumpers:  (This picture from the bottom of that link.) 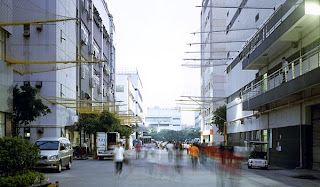 Some thoughts from Chinese experts who have considered the problem:

Zhang Chun, the director of a suicide prevention program in Nanjing, said:


Since the opening up, the rapid social changes and the clash between modern and traditional values have made many people lose their mental balance.”


“The development of China as a world factory is a fundamental reason causing these suicidal cases.”

To me, the biggest problem wasn't the suicides, which may or may not be at a higher rate than suicides elsewhere; it was the working conditions.  People who focus on the suicides miss the big picture of millions of people working long hours in extremely crowded dormitories so that we can have cheap iPhones.

And it appears that the wages in China may be getting too high due to wage inflation!  So.....

Foxconn is considering a move to Brazil!

It appears that they now are paying the Chinese urban factory workers over 2 bucks, so it is time to move on.  Got to keep those profit margins high to be competitive, of course!


Links about related developments to the Chinese iPod workers for Foxconn:


Is Apple's suicide factory outsourcing to even cheaper Chinese peasants?


Steve Jobs, one of the founders and the guiding light of Apple died yesterday at age 56.  He is being hailed as a visionary, and, of course, he was.


It is always sad that someone with such genius and such strong personal traits died at such a young age and after such a long illness.  My deepest sympathies to his family and friends.


I wish that Steve Jobs had lived longer.  Perhaps he could have been a visionary in another way.  Perhaps he could have actually taken some responsibility for the working conditions of the people who have helped to make him fabulously wealthy and demanded that people who produce iProducts, no matter where they live, worked in humane conditions making a decent wage.   He could have gone in front of the world and told people, "Look, I have more money than I could spend in two lifetimes or three.  I can no longer tolerate people making me rich while they toil for 12 or more hours a day under extreme quotas for low wages.  I won't accept that any more.  We're going to have to raise the prices of our iPads, and I'm going to take a hit in my personal holdings, but I owe more to the world than just some new, shiny electronic products."


Well, I can dream.  Meanwhile, the Foxconn workers will continue in their dorms, hot bunking in small dorm rooms, for a few bucks a day.


Peace to you, Steve, who gave us so much.


I wrote more about Steve Jobs and the Foxconn workers here.


Foxconn and Apple are in the news again.  Here are a few more links:


Campaign for an ethical iPhone


Foxconn Raises Salaries to a Pittance