The Role of the Government in Capitalism

"Why do you think corporations are sending jobs overseas? Lower costs? Larger margins? Cheaper labor? Less taxes? Less regulations? Unions?"
This series of questions was asked by someone commenting on an article about jobs a few weeks back.  The person posing the questions seemed to be hostile:  He wanted to make sure that people who were complaining about the lack of jobs understood that the problem was all of those regulations, nasty unions, the insistence of the American labor force on fair wages and working conditions.  (Just a touch of sarcasm there.)


I didn't reply to that particular post, but I did copy these questions and thought about them, as these kinds of questions are typical in discussions about the current jobs crisis.
Do we want to become a Third World country? 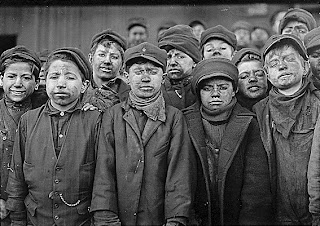 After consideration, here's my reply to the series of questions in the first paragraph:

"All of the above.  Corporations are indeed sending jobs overseas because people in developing countries still work for less, because there are fewer regulations, because unions are just getting started or don't exist. (I only question lower taxes, as the effective corporate income tax rate here is less than that in most large developing countries, such as China or Brazil.)


But that doesn't mean that it is just fine and we should accept this, get rid of unions, and get rid of the minimum wage, roll back regulations,  so that we, the U.S., can become a third world country where people are willing to work for a buck an hour or less while they live in cardboard boxes."
The questions continued:
"What do you think the US can do to entice corporations to move jobs back to the US?"
My reply:
"We need some kind of tariff/tax plan so that goods and services produced abroad in countries that allow pollution and that allow workers to be treated as slaves do NOT get to sell their stuff freely in this country.  We need to say:  Corporations, if you want to sell in the U.S., you'd better make sure that you treat your employees well and pay them a fair wage.  Otherwise, you don't get to sell your stuff here."
Of course, I've oversimplified the whole thing and I'm quite aware that it wouldn't be easy to work out.
The question continued:
"You know that you cannot regulate businesses back to the US. You cannot force businesses back. Or is it that you think you can?"
Of course you can't and anybody who thinks you can "force" businesses to bring jobs back does not understand the nature of capitalism:
The Purpose of Corporations is to make money for their owners.  Period.
Let's repeat that very clearly:  The purpose of corporations, the purpose of any for-profit business, is to make money for the owners/shareholders of the firm.  A corporation has no purpose, no reason for existing, other than to make a profit.  That's not bad or good, immoral or moral, it just is.  One might say that, by definition, a corporation is greedy.  It has no reason to exist without greed.
There are three things that might keep any natural "greedy" corporation from exploiting workers, cheating consumers, and fouling the environment:
Of course, we know that is not true.  There is a limit to how much the free market can limit the inherent greed of capitalism, as we have seen over and over since the advent of large capitalistic enterprises.  If moral leadership and the "free market" were enough, we wouldn't have had an economy that allowed such horrors as those represented by the children at the top of the page:  Child labor, the Triangle Shirtwaist fire, or the conditions of meatpacking workers immortalized in The Jungle by Upton Sinclair (and don't for one minute think that those horrors are dead and gone and could not come again).


Unfortunately, we have too many who slept through American history or have forgotten why we have labor laws, unions, environmental regulations and the rest.  They have forgotten the limitations of the free market.
Therefore, we have the third entity to make sure that workers aren't exploited, that air and water aren't polluted, and consumers aren't cheated as corporations and business owners pursue those profits, and that is:

3.  Government.  Government is the will of  "we the people" to keep corporations honest, to keep them from fouling the environment, to assure that employees and consumers are treated decently and fairly.  This is the natural role of government in a free market capitalistic economic system.

When the government does the will of the corporations and does not protect the workers, the consumer, and  the environment, then we have big, big problems,and that is what is happening in this country.


When the government buys the argument that they must "protect the big corporations and help them avoid the discipline of the market" in an effort to "help the country", and puts helping corporations ahead of helping consumers, workers, and the environment, then we have big problems.  When the government seems to believe that helping corporations is the same as helping consumers, employees, and the environment, then we have big problems.
The answer is clearly not letting corporations do whatever it is they want to do in the pursuit of profit in order to "keep jobs here".  That's a very, very slippery road on which some of us (like most Republicans) have started down  philosophically.  This is still a very rich country with a desirable consumer base.  If these companies want to sell to us, they play ball with us, with "we the people".
The governments, all of them state, federal, and local, should remind businesses of the profits that they can glean from the United States market; from the raw materials, the land, the people.  If any profit making enterprise doesn't want to work with "We the people" in terms of fair labor practices, a clean environment, and a country that exists for the good for all of the people, not just the top few percent, they should not be allowed to exist here.  They should be booted out of the U.S.
As I said above, this is a rich country with a very desirable consumer base and an educated work force.  If Company A won't play ball with "we the people", they can go, and Company B will come along any minute.
Company B and Company C and Company D may perhaps have more of that moral leadership; they may have executives and boards of directors who aren't as pernicious... who aren't as extremely greedy.... and who value this country, its markets, and the principles upon which it was founded.
Let's remember again what the big bad old "government" really is or should be:  Government should not be a dirty word or a bad thing; it is (or should be) the will of "We the People" writ large.

Update 6/14/2012:  A great read on "We the People" and the meaning of government called "The Government is Us" was published today on Crooks and Liars.  Please link over to it and read!