Why are Dogs Against Romney?
Do you know the story of Mitt Romney's dog Seamus and his infamous car ride?


If you haven't yet heard the tail ..... er ... tale (Anybody out there who hasn't heard it yet?), sometime in the 80's the Mitt Romney family embarked on a vacation involving a long car drive.  As the Romneys had five kids, they apparently had no room in the car for the family Irish setter, Seamus.  So father Mitt strapped a kennel to the top of the car and put Seamus in the kennel, in preparation for the 12 hour road trip.

Dogs Against Romney at the Dog Show and on MSN HERE: Februay 16th update!


Mutt Romney Blues with Ry Cooder HERE!
Now, anybody who knows about dogs and cares for them knows that dogs need to be limited in their time riding in cars with their heads hanging out the windows, much less sitting on top of the car.  Dogs can be blinded or experience other temporary or permanent conditions from being exposed to wind at high speeds for a period of time.  Romney has said that he constructed some kind of "wind shield" for the dog, but, as soon became apparent, it wasn't enough.
To Romney (Do a Google Search)
As the Romneys drove along the highway, one of the Romney sons noticed brown stuff streaming down the back window.  Sure enough, Seamus, obviously in stress from the high and constant wind, had defecated in the cage atop the car.  (Dogs will generally not soil a closed area unless they are sick or in extreme stress.)  The story is that Romney pulled over, hosed the car and, apparently, the dog, then put the wet dog back up in the kennel as the family continued on its way.
This story is again making the news, as Romney looks more and more like the Republican nominee for the highest office in the land.

(Our friends at Dogs Against Romney have been getting press in many places and now have dog coats, T-shirts, and even hoodies for sale.. Alas, no chew toy that features Romney's beaming smile.. yet.  See below for pics.)

Now.. Why is this offensive?
I'm not going to go so far as to call Romney a sociopath, but cruelty to animals is a sign of such a disorder.  Romney may not consider his behavior towards Seamus as cruelty, not in the sense of promoting dog fighting, drowning cats, or other such truly abhorrent behavior.  But tying a dog to the top of the car for a long, high speed trip just shows a certain...  lack of understanding and care for the animal.  That Romney continued the practice after the dog made its anxiety or fear known by defecating in its cage makes the situation worse.


Here are a few links that discuss this car trip:

"Struggling"
If Romney can't understand a helpless dog, can this man possibly understand and be empathetic to the concerns and struggles of the 310,000,000 people in these United States?
Hmmmmmmmm.....
Let's see how he might handle those "struggles":
I recently came across a clip of Romney pressing the flesh in his failed bid to be the Senator from Massachusetts in the 1990's.  While the cameras rolled, he walked into a small cafe filled with middle aged and older "average" people.  He walked up to every person in the place, stuck out his hand and asked "How are you?" in his politician voice.  Most just mumbled the expected "O.K." or "fine", smiled and went back to their coffee.  But one woman, a waitress or perhaps the owner of the establishment, actually said, "I'm struggling."
Here was Romney's chance to connect with the people.  If he either had a coach at his side, had thought quickly enough, or actually cared about this woman and her plight, he would have stopped, looked squarely at her, and said, "I'm sorry you are struggling.  If I were to be elected Senator, what kinds of things could I do to help you?"  He would have listened for a minute to whatever it was she had to say.
But no.  Mitt was clueless as usual.. as was evident by his $10,000 bet, as was evident by his recent comment about the joys of firing people.. in a country in which over 140,000,000 pink slips have been handed out in the past four years.  Mitt just smiled at the lady, seemed to mutter something positive without ever hearing what the woman said, and went right on.  Not a second comment; not a second glance.
(As soon as I again find that clip, I will link to it here.)
Help for Struggling Homeowners
And in this economy, when millions have lost their homes due to loss of income; when millions may still lose their homes as many are still trying to recover; when millions of former homeowners hope to be able to rent a small apartment vs. living on the street or on a cousin's couch, Romney plans on bulldozing his too-small 3,000 square foot $12 million ocean front home (with a lap pool and a walkway down to the beach) and replacing it with an 11,000 foot ocean front home.  (He plans on keeping the lap pool).
Even by presidential standards that's pretty extreme.  Now.. how many average workers did he lay off during his time at Bain to rake in the 3 million dollars that it cost just to buy that cozy but too small beach house?  Between 50 and a 100?  Well, that wouldn't even make a dent in our unemployment situation, would it?  So I guess it's o.k.  After all, these "job creators" really deserve every last dime, don't they?
Sic 'em, boy!
Grrrrr.......


Show your support for the pack.  Click HERE to browse or buy: 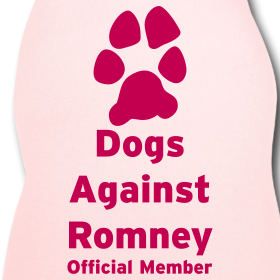 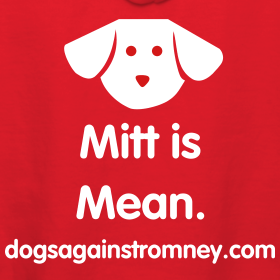 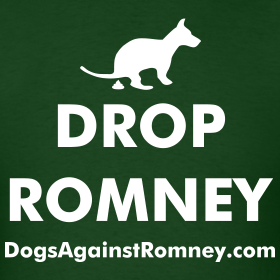