About Mitt Romney:  If you are looking for a "job creator", it would be best to pass up Romney, as his "job creation" record as governor of Massachusetts just wasn't that good.


When Mitt Romney Came to Town...

You may have heard that Massachusetts was 47th in job creation during Mitt Romney's one term as governor in that state.  Some of Romney's fans, then, are touting the unemployment rate in Massachusetts during his tenure in control of that state, from January 2003 to January 2007.  It went from 5.8, the annual average in 2003, down to 4.5, the annual average in 2007.  Sounds good, right, a nice, solid drop?  Well... not really.... 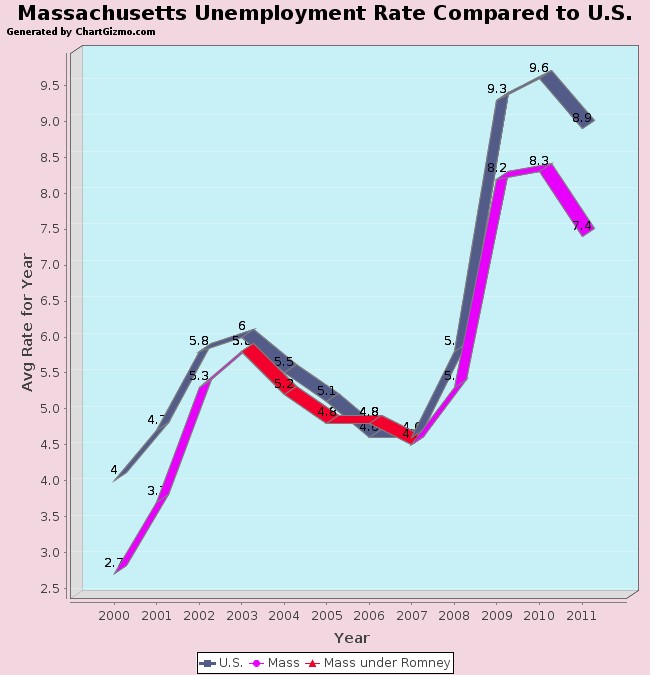 
Romney himself is somehow trying to position himself as superior to Obama as a "job creator".  Well, it is hard to compare the governor of a state with a President.  And it is hard to make that comparison in two different time frames and economies.


We were still recovering from the 9/11 attacks when Romney was governor, and the economy was stagnant in early 2003.  But it picked up over the next four years, and was pretty robust by the time Romney left office in January 2007.  The housing bust had not yet hit the general economy.


Obama, on the other hand, took office in the worst recession we've had in 80 years.  The economy was in freefall.  Every state, every sector of the economy was struggling back in late 2008 and early 2009.

So let's level the playing field, which we do on the graph above.  Let's just compare Romney's unemployment record in Massachusetts with that of the U.S. as a whole in that same time frame, from 2003 until 2007.

What are we looking at here?

This chart compares the annual unemployment of Massachusetts against that of the United States as a whole from the year 2000 until 2011, the latest completed year.


But what about those years in the middle of the graph?


The best thing that Romney did for Massachusetts was the implementation of Romneycare, which is the prototype for Obamacare, the Health Care Reform program implemented in 2010.  And Romney, in his attempt to get the Republican nod as Presidential nominee, is now disavowing Romneycare.

But Romney as a job creator?

There are a number of comparisons out there, comparing Romney to the U.S. as a whole during those years, and comparing the 2003-2004 recovery in Massachusetts under Romney with the current recovery under Obama.  Most of those deal with Romney's job creation of lack of it during his tenure as governor.

But bookmark this graph to use if someone starts talking about the unemployment rate under Mitt in Mass.  It simply wasn't that good.

Here are a couple of other comparisons: