Burning Down The House...

Job loss and creation and burning down the house:

(Updated September 30, 2016:  I first wrote this article in 2012 as an answer to the many Republicans who were insisting that the recovery under Obama was not as robust as they thought it should be.  Four years  and 10 million MORE private sector jobs later, we still have people complaining that the recovery hasn't been as robust as it should have been.. and blaming Obama and the Democrats.  Well, my description is as apt today as it was 4 years ago.)


Can be good things, right? Perhaps, if one is talking about women, men, having a good time, an economy or a business that is taking off.

But "fire" can also be something not good at all...  a house burning out of control.

In that situation, you call the Fire Department and you make sure you give them room to put out the fire.  Before any rebuilding can take place, the fire has to be under control, then out, then it must cool down, then debris needs to be cleared away.  That all takes time.  And you don't blame the Fire Department for the fire.  (I don't, do you?) 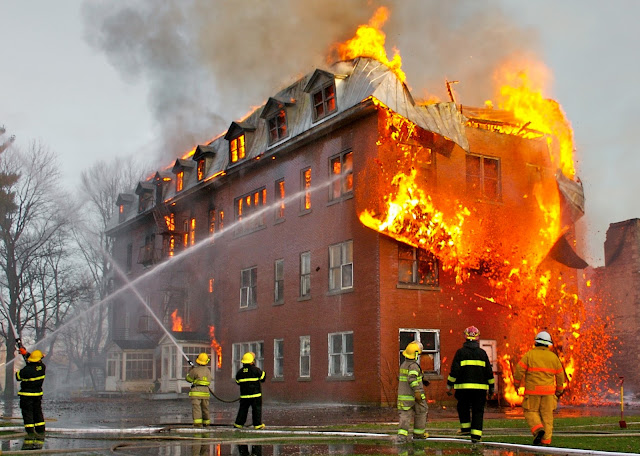 But this is what the Republicans are trying to do:

Blame the Democrats, particularly President Obama, for the fire.  They go all of the way back in time for this, some of them even blaming Jimmy Carter for the housing disaster that led to the banking crisis.  If not him, then Barney Frank. More about that in another column.

But there are millions of your (and my) fellow citizens and voters out there who somehow think that things were all peachy keen BEFORE Obama took the oath of office..and that somehow he caused the fire?  If you are a reasonably informed person, this seems absurd... but it doesn't seem absurd for millions of your friends and countrymen who seem to think that the Great Recession, the Great Financial Meltdown, actually started in January 2009.

Duh.  But those uninformed (or forgetful) voters get one vote, as do you and I.

O.K., let's get the timing right:  The housing bubble burst in late 2006; it started simmering and smoldering in late 2007 or early 2008, and erupted into a full-blown crisis in mid 2008.  Jobs and human beings, particularly middle and working class human beings, were the fuel, the ashes, the "houses" of this fire.  It was burning; a fire out of control.  It was a scary time and it burned and flared for months.

But at the same day (Inauguration Day in January 2009) that the Fire Engines were pulling into town; the Republicans were plotting how to obstruct the efforts to put out that fire, cool it down, and stop the clean up.  While you and I wanted and hoped for the fire to be put out, the Republicans didn't want the fire stopped.  They wanted power back, and they knew the way to do that was to keep the fire smoldering and occasionally flaring.

Now... most of you have seen a fire sometime in your life... How much longer would the fire smolder if the efforts of the Fire Department to get it under control, put it out, cool it down, and clear up the debris were hindered by other people?  What if the Fire Department had to fight off people trying to pull them off of ladders as they handled the hoses with the other hand?  What kind of a mess would it be?

And wouldn't you be infuriated if you saw that happening?  And how much more infuriated would you feel if your loved one or your property was in that burning building while others tried to pull the firefighters off of the ladder or turn off the water?

That scenario is unthinkable for most fires, of course.

But not for the economic fire that took over this country in 2008.  The Republicans did not want to extinguish this fire.  They were meeting and plotting from Day 1 on how to keep the fire going so that the Democrats and Obama would get the blame.  I've written about this before

So let's look at this great chart in terms of that fire:

It
It shows us the number of private sector jobs that were first lost and then added.
First, that sharp declining red line:   That's the fire, burning out of control.

Then the line turns blue, still declining:  The Fire Department has arrived.  The fire is still out of control until about April 2009.  Finally, April to July to October to January, the fire is finally out.  Not surprising it took that long.  How long does it take firefighters to put out a fire compared to the time it takes the fire to rage?

Finally, in early 2010, the fire is cool enough, enough debris is cleared, so that we can start rebuilding.  Which continues to this day.  It always takes much longer to rebuild than it does for the fire to rage.. doesn't it?

So remember.. how would you feel if there were thugs and criminals pulling firefighters off of the ladders, trying to turn off the water, while those firefighters were at work trying to protect or rescue your property, your loved ones?

That's what the Republicans have been doing.  Don't doubt this for a minute.  They have told us.

And you should be infuriated with them for doing this to you and to me and to this country.